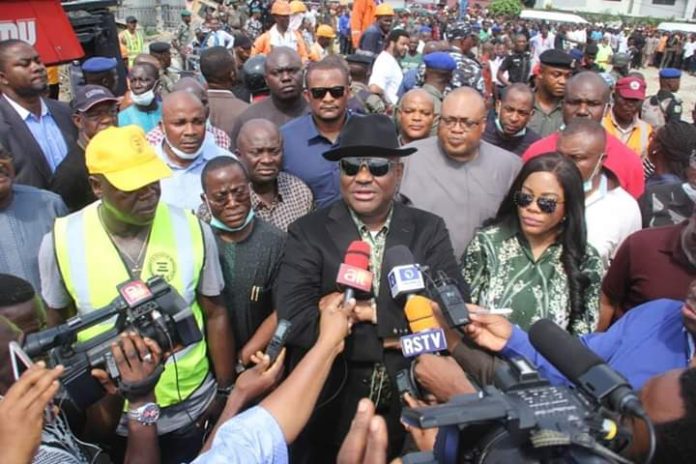 It was the sacked Rivers APC Governorship Candidate who emerged from a criminally structured indirect primaries that initiated his party men/women into the politicization of the tragedy of the collapsed 7-storey building at Woji Road, Port Harcourt. He went to the location to campaign, displaying banners begging for votes.

This business partner to Rotimi Amaechi who illegally acquired Rivers State assets, went ahead to sponsor countless APC propagandists to dance on the misfortune that befell Rivers State.

As such, in the last few days, APC Sponsored agents have taken to the media space to circulate misinformation and outright lies against the Rivers State Government with a view to getting ungodly political capital.

But the reality on ground is that right from Friday, November 23, 2018 when the ill-fated 7-storey building at Woji road collapsed, officials of the state Government have been working round the clock to save lives and ensure that necessary steps are in place to promote safety at the site of the unfortunate incident.

Even though Governor Nyesom Ezenwo Wike was in France to cement a deal to stop Air France from terminating their flights to the Port Harcourt International Airport , the emergency infrastructure of the state government was activated within minutes that the building collapsed.

After a while, Deputy Governor Ipalibo Harry Banigo and other officials arrived the scene and the rescue efforts intensified. That very night, several operational equipment were deployed to the site, while the State Government reached out to relevant health professionals groups to assist in the operations.

The Chief of Staff and a host of commissioners slept at the site of the unfortunate incident on the orders of the Rivers State Governor. It was from that site that the State Information and Communication Commissioner, Emma Okah gave live updates of the rescue efforts and statistics of those rescued alive and those who lost their lives.

On Day Two of the operations, the Deputy Governor of Rivers State, Dr Ipalibo Harry Banigo visited the site a second and made critical observations on the process in view of suggestions of professionals and members of the public. On this day, more personnel and equipment were deployed by different construction giants and corporate organisations working in concert with the Rivers State Government to address the issue. This exercise continued all through the day.

On Sunday, 25th November, 2018, Rivers State Governor, Nyesom Ezenwo Wike cut short his official trip to France , discontinued with negotiations with Air France and rushed back to Port Harcourt to take charge of the rescue operations. From the airport, alongside his wife, Governor Wike drove straight to the site of the collapsed building.

Right on ground, he monitored the processes and took far reaching measures to intensify work in order to save lives. In this wise, there are no sacred cows.

Governor Wike directed the State Attorney-General to set up a Commission of Inquiry to ascertain the remote and immediate causes of the collapse of the Private 7-storey building at Woji road, New GRA in Port Harcourt.

He said: “I feel so pained that we have to face this kind of calamity at this time. I commiserate with the families that have lost their loved ones who came to seek their daily bread. Government will do all it can to give them the necessary support.

“I have directed the Attorney-General of Rivers State to ensure that all legal steps are taken to do what is right within the ambit of the law “.

The governor ordered the immediate arrest of the owner of the collapsed building, saying that the State Government will bring all culprits to book.

“Whoever that approved this structure and those involved in the construction will face the law. Government will take every necessary step to ensure that culprits are brought to justice .

“Whoever is involved, from the owner or the contractor or the officials of the state, they will face the full weight of the law “, he said

The governor is a man who loves humanity and keeps his words. On Tuesday night whilst playing host to the Ambassador of Netherlands to Nigeria and the Broadcasting Organizations of Nigeria, Governor Wike outlined further to be taken.

He noted that the collapsed 7-storey building started as an illegal approval for 5-storey building in 2014, which was later formally approved by an official in September 2018. He said those involved will be sanctioned.

The governor said that all government officials directly involved in the approval will be shown the way out, from where they will face the Judicial Commission of Inquiry to investigate the unfortunate incident.

The State Executive Council meeting of Wednesday, November 28, 2018 discussed the collapsed 7-storey building extensively. It was at this meeting that the governor accepted the offer of the Commissioner for Urban Development and Physical Planning, Dr Reason Onya to step aside for comprehensive investigations to take place.

It is sad that the non-existent Rivers APC believes that it can attract relevance through mischief and deliberate falsehood.

The rescue operation continues at the site of the collapsed building. It is a delicate operation that is premised on caution to ensure the best outcome. The Rivers State Government working with well-meaning organisations and stakeholders will do the best in the trying and unfortunate circumstances at the private collapsed 7-storey building.

2023: Obinna Ichita and the Madness of an Ambition By Micheal Chijioke

Ikpeazu to Complete Port Harcourt Rd, Others, Before End of Tenure

Paris Club Refund: Obinna Oriaku and the Hypocritical Magnanimity of an Accuser… By Toby Chuks

Is the Nigerian Army now on the Ballot in Rivers State?...