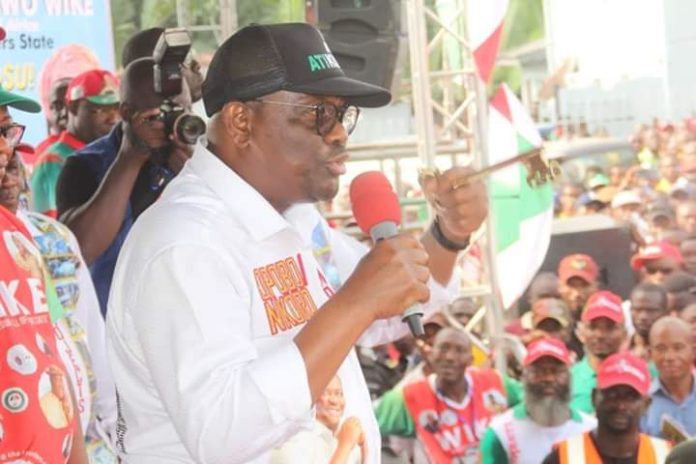 Ahead of the Presidential Election of February 16, 2019, Rivers State Governor, Nyesom Ezenwo Wike has called on Nigerians to put an end to the developmental darkness foisted on the country by the failed APC Federal Government.

Governor Wike charged the people to remain vigilant as the APC Federal Government and her associates are plotting to steal votes.

“We have come here to tell you to be vigilant because armed robbers are on the prowl to steal mandate and votes. We must stop them.

“The APC are armed robbers on ground to steal votes and manipulate the elections. We must not allow them”, he said.

The governor urged the youths and women to work for the victory of all PDP candidates because the future of the state will be handed over to them. He said Women and Youths will take over 65percent of all appointments during his second term.

He noted that power has come back to the people as 142 leaders will emerge from the 142 Polling Units of the Local Government Area. He said that the political growth of any politician would be premised on electoral victory at the polling unit.

Holding the key presented to him by King Dandeson Douglas Jaja of Opobo, Governor Wike described the day as one of his happiest moments. He said fulfilling the promise he made to the king in 2014 has encouraged him to do more for his people.

He assured that he will continue to fulfill promises all through his second term because it gives him joy to make the people happy.

Rivers State PDP Chairman, Bro Felix Obuah said that the welcome reception by the council of Chiefs signifies the victory of Governor Wike in the area.

PDP Candidate for Opobo-Nkoro State Constituency, Adonyi Diri said the governor’s visit is to fulfill all righteousness because the governor has massively developed the area.

Rivers State Commissioner for Education, Dr Tamunosisi Gogo-Jaja said Opobo-Nkoro are celebrating the high performance of Governor Wike and his connection of the town to the rest of Rivers State.

He said that Opobo-Nkoro will never vote for a party that desecrated the Kingship of the area. He said the people are fully in support of the Rivers State Governor.