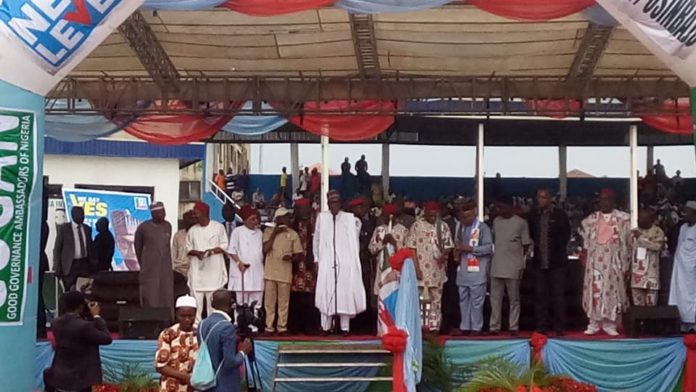 The All Progressives Congress (APC) has said that while it welcome foreign observers coming to monitor the 2019 general election, it will not accept any form of meddlesomeness, intimidation or interference by any foreign country in the electoral process in the guise of election monitoring.

The party said those coming to observe the election should be aware that Nigeria was a sovereign state and not a colony of any nation and should therefore apply international best practices in carrying out their functions as election observers.

National Publicity Secretary of the party, Mallam Lanre Issa-Onilu said in a statement in Abuja that the party was solidly behind the statement credited to the Kaduna state Governor, Mallam Nasir El-Rufai, adding that they were ready to defend the integrity of the nation.

Onilu said “We stand fully by the statement as regards any country that thinks we are a colony; that we have a right to defend every inch of this country; and we are not a banana republic.

“So what Governor El-Rufai said clearly is the position of this government that we are proud as Nigerians and we are ready to defend the integrity of this country and that any country that thinks in the name of election will want to interfere and dictate to us or intimidate us in any way, it is unacceptable. That is exactly what Governor El-Rufai has said. The PDP can twist it the way they want.

“Governor El-Rufai never said people should not come and observe or monitor elections. And he was not referring to people who are genuinely coming to monitor and observe the elections. Nigerians also go to other countries as monitors and observers. So that is acceptable to us. We welcome peer review. What we don’t welcome and what is unacceptable to us is any country thinking we are a colony, we are not. We are a sovereign nation.”

On the development within the party in Imo state, Onilu said the National Working Committee of the party was yet t9 take a decisi. On the disciplinary action taken against the Imo state Governor, Rochas Okorocha by the state chapter of the party.

“We are also aware of the fact the Party’s local chapter has taken some disciplinary action as regards the Imo State governor, Owelle Rochas Okorocha. In last few weeks, we have been going round the country to present our scorecard before Nigerians and to seek a renewal of this mandate to continue the good work that President Muhammadu Buhari has embarked on.

“The National Working Committee has not been able to seat on that and many other issues pending. In due course the NWC will meet and that may be one of the issues that will be considered.

“As at today, the real issue in Imo is to emphasise the fact that APC is supporting all APC candidates in Imo and we do not recognise candidates that are not from the APC. We encourage the people of Imo to vote massively for APC candidates. The governorship candidate in Imo remains Senator Hope Uzodinma.”

On the party’s preparedness for elections, he said “The APC has been working on a daily basis through our activities in terms of implementation of policy and programmes that touch on the common people. These are what we are now showcasing to the public as a means of telling them that the change we promised is actually taking place; seeking a renewal of the mandate they gave us almost four years ago

“As we all can see, PDP missed the bus. They got to the bus station and instead of boarding the bus; PDP is busy picking on issues that do not concern them. All the time they ought to be campaigning, they wake up on daily basis based on their infamous Dubai strategy meeting that failed before they landed in the country

“PDP showed abinitio that they were not coming into the elections to win it through the ballots. They put in place all sort of methods and illegal means they had wanted to deploy one after the other to get back to power through the backdoor. The PDP was busy creating false and fake news, spreading all sort of fallacies and that has now come to be their undoing.

“It is clear that the elections in February 16, the election on March 2 are elections that the APC has demonstrated clearly that we are ready to win. The PDP has not offered any alternative to whatever APC is doing.

“When you look at the presidential candidate of the PDP, Alh. Atiku Abubakar, he said on national television that one of his priorities is to make his friends rich but we are busy improving the lives of the common people. Nigerian will remember that. Atiku has said he is coming to sell national assets to his foreign and local friends.

“The question we are going to ask during the election with our PVCs is what happened to all the national assets during the 16years of the PDP and especially when Atiku was vice president and chairman of the privatization council. National assets were sold for a pittance and they have all gone down.

“The only things that remain today are those that are personal to him. The gains he made from his position as vice president. This is the person that is contesting against our candidate. A person we just discovered paid heavily to get a 24-hours entrance into the US. That is the kind of person we want to have as president. Nigerians won’t do that.”

He also frowned at the criticism that has trailed the redeployment of Commissioners of Police, saying “Few weeks ago, it was the same PDP that was crying that the police have been compromised and that the former Inspector General of Police was poised to deliver the election to APC. Now the president has taken the position by appointing a new IGP. Now I don’t know where the noise is coming from.

“There is no need to deceive ourselves. The whole noise about the posting of commissioners of police is about Kwara state, Dr. Bukola Saraki who is scared stiff remembering all he had done  in the past when he had the control. What he normally used the police for, the way he used to manipulate INEC and he is thinking that the same thing may happen to him.

“How could you suggest to the police not to carry out its routine exercise. If the police think it is part of its preparation to ensure a free and fair election, provide security before and after the election is to move its personnel around, how does that bother anybody?

“It is because Bukola Saraki has realised without having control over INEC and the police, there is no way he can win his seat to comeback as a senator. He cannot even deliver his polling unit, without being aided by the police and INEC and that is what he has been doing before but is no longer available for him.

“But let me assure him and his co travellers, the APC doesn’t need those illegal things to win elections. Infact, we need them to do their jobs, we need them to provide a level playing field to all political parties. That is all we want from the police, that is all we want from INEC. We don’t need the template Bukola Saraki and the PDP have been using and we are not going to use it.”

Aso Rock: Why I don’t think the Buhari is from Sudan...