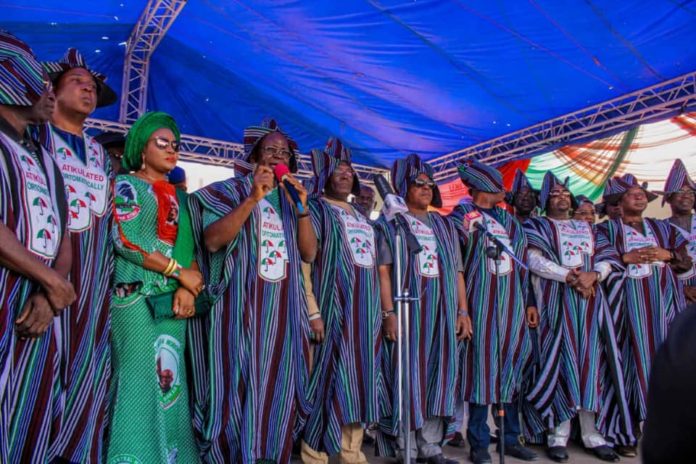 …..As Secondus warns against sending military to Akume to rig.

The Presidential Candidate of the Proples Democratic Party, PDP in February 16, 2019 Presidential election and the former Vice President of Nigeria, Alhaji Atiku Abubakar has assured the people of Benue and indeed every Nigerian that his Presidency will observe the rule of law to the letter.

Alhaji Atiku said that he is a stickler for rule of law because he has been a beneficary and that if voted into power he will respect every law because he believes that any law made by parliament is for the good of the society.

Speaking on friday when the PDP Presidential campaign train arrived Makurdi the state capital, the former Vice President said that the security challenges in the state will be a thing of the past if he is voted into power because he understands the situation and intends to engage the people adequately.

Alhaji Atiku who met with critical stakeholders in the state, the Benue Traditional council comprising all the royal fathers in the state, the Arewa community and the Christian Association of Nigeria CAN, Benue chapter before addressing a mammoth crowd of jubilant supporters at the Aper Aku sports stadium in Makurdi, described the state as his second home noting that he is a titled person in Tiv Kingdom.

The National Chairman of the party leading the campaign, Prince Uche Secondus continued his message against rigging of the forthcoming general election.

He warned against the planned deployment of military personnel to help Senator George Akume former Governor of the state manipulate elections in favour of the APC in the state.

The National Chairman whose media office issued the statement signed by Ike Abonyi also continued his attack on the Governor of Kaduna state, Mallam Nasir El rufai for his reckless statement threatening foreign observers that they will return to their country in body bags saying he should be sanctioned and taken to international court for threat to peace and democracy.

Two former Senate Presidents, Iyochia Ayu and David Mark as well as the current Senate President who is the a Director General of the campaign council, Dr. Bukola Saraki also addressed the rally highlighting the potentials of the Presidential candidate.

The three speakers were unanimous that Atiku will make a better President because he understands the country and has been tested in both public and private sector.

Benue state Governor Dr Sam Ortom told his people that unlike the APC candidate President Muhammadu Buhari, the PDP flag bearer will respect the rule of law and will attend to the disturbing issue of unemployment in the state and the country.

At the EJ Esuene sports stadium in Calabar, Cross River,, Atiku promised to work closely their Governor to establish a deep sea port n the state..

In Calabar, both Atiku and Secondus warned the military to stay out of politics and stop making unguided statements concerning this election.

The National Chairman also warned the Central Bank of Nigeria CBN, and the NNPC to be careful how they allow APC government access to public funds for the election as Nigerians are watching and would hold them accountable.

Also In Calabar, the former Governor of the state and deputy Director General of the Presidential campaign Senator Liyel Imoke and the incumbent Governor Prof. Ben Ayade all assured of PDP’s victory in the state.

The Presidential campaign was also at the palace of the Obong of Calabar.