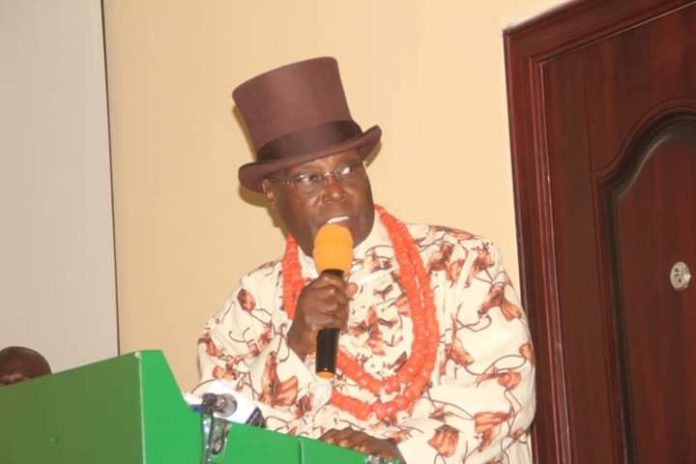 PDP Presidential Candidate and Former Vice President Atiku Abubakar has declared that the difference between his proposed programmes and the failed APC Federal Government can be likened to the distinction between darkness and light.

Addressing the Rivers State Council of Traditional Rulers at their council secretariat on Monday , Alhaji Atiku Abubakar said what he is bringing to the table is to set the country on the path of growth and development.

He called on the traditional rulers to mobilise their people to come out in their numbers to vote for the revival of the country.

“To all our traditional rulers, I call on you to ask our people to come out enmasse and vote.

“This is the most important election in the history of our country . If you compare what I plan to do with what they are doing, the difference is between darkness and light “, he said.

Atiku Abubakar assured the traditional rulers that he remains committed to restructuring as a way of devolving power and resources to the states.

He said: “The issue of restructuring is a stance I took since 2004. It put me against my boss and we had a disagreement. Restructuring is the best for the country”.

He assured traditional rulers that he will work to give them defined constitutional responsibilities as was the case in the past.

The Former Vice President urged the traditional rulers to use their pride of place in the communities to promote the interest of the people.

According to him, the official recognition granted him by the Rivers State Council of Traditional Rulers is an indication of his acceptance by the people.

He said: “Niger Delta will not be neglected under my administration “.

He noted that several key projects will be executed in Rivers State and other parts of the geo-political zone.

Rivers State Governor, Nyesom Ezenwo Wike said that Atiku Abubakar will be sworn in as President of the Country on May 29, 2015. He said that Nigerians have made the decision to elect the Former Vice President.

He said Rivers people support Atiku Abubakar and they will massively vote him to revive the country.

He said: “Whoever talks about restructuring has the support of the people of Rivers State. There is no negotiation on this. Rivers State is for Atiku Abubakar and PDP”.

Chairman of Rivers State Council of Traditional Rulers and Amayanabo of Opobo Kingdom, King Dandeson Douglas Jaja said the traditional rulers are happy that as a democrat, Atiku Abubakar has made restructuring the cornerstone of his development agenda. He said restructuring will address the imbalance in the system.

He said rather than being treated fairly, Rivers State has been deprived , demarketed and denied basic infrastructure by the Federal Government.

Highpoint of the occasion was the recognition of Atiku Abubakar by the Rivers State Council of Traditional Rulers.

Fani-Kayode: Osinbajo an emissary of Satan, betrayed the Church