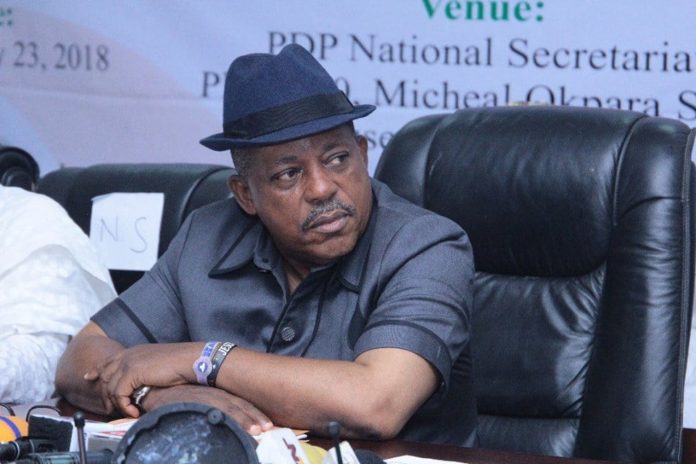 ……says its Buhari’s agenda to cling to power

The National Chairman of the Peoples Democratic Party, PDP, Prince Uche Secondus has said that shoddy arrangement for this election by the Independent National Electoral Commission, INEC, is a deliberate pre determined agenda of President Muhammadu Buhari to cling on to power even when it’s obvious to him that Nigerians want him out.

Prince Secondus said that the postponement which is part of a grand design by the All Progressives Congress, APC, to thwart the will of Nigerians at all cost, clearly exposes INEC as a failure and calls on the Chairman of the Commission, Prof Mahmood Yakubu to resign immediately.

The PDP leader warns that the party will not accept anything short of a well organized electoral process devoid of manipulation, harassment and intimidation of voters and the opposition particularly members of the PDP.

Having failed in all their nefarious options to enable them cling on to power, the APC and the INEC came up with the idea of shifting election an action that is dangerous to our democracy and unacceptable.

The National Chairman said that the APC in connivance with the INEC have been trying all options including but not limited to burning down INEC offices in some states and destroying of electoral materials to create artificial problems upon which to stand for their dubious act.

According to a statement from the National Chairman’s media office signed by Ike Abonyi, Prince Secondus said that the party is privy to all the pressures from the APC and the federal government to arm twist the INEC, to dance to their new strategy after their earlier ones failed.

“With several of their rigging options failing, they have to force INEC to agree to a shift in the election or a staggered election with flimsy excuses pre manufactured for the purpose.

“For the avoidance of doubt the PDP sees this action as wicked and we are also aware of other dubious designs like the deployment of hooded security operatives who would be ruthless on the people ostensibly to scare them away.

He said that by the action of the President he has further demonstrated his insensitivity costing the huge cost after Nigerians including those who came home from abroad have all mobilized to their various constituencies.

The National Chairman recalls that the PDP had earlier alerted Nigerians that the APC was coming up with lined up rigging strategies including burning down of INEC offices and engineering crisis in PDP strong hold areas to scare away the people.

Prince Secondus said that the wicked killing of over 60 persons mostly women and children in Southern Kaduna on the eve of election is a copious ploy by the APC to frighten the people away from voting knowing too well that they were not going to record any vote from the area.

“Recall that the Governor of Kaduna state, Mallam Nasir el rufai had earlier threatened international election observers of going to their country in body bags and with the fatal violence in the state on the eve of election, it’s clear what the motives are, to frighten the observers from the state so that he can carry out his nefarious acts.

Prince Secondus also regretted that President Buhari who made a promise at the signing of peace accord that the election will be conducted in a fair and transparent atmosphere has gone ahead in breach of the peace agreements to send soldiers and other security agencies to arrest, harass and intimidate opponents in Rivers, Akwa Ibom, Kwara, Kano, Kaduna states.