Home FEATURED All corrupt governors will have no escape root after May 29 –... 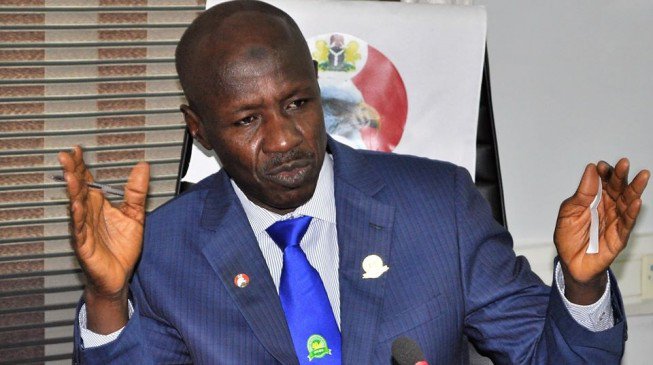 The Economic and Financial Crimes Commission (EFCC), has vowed that there will be no escape for corrupt governors as the commission will go after them immediately their tenure expires on May 29, 2019.

According to Magu, EFCC would go after ex-governors and politicians who had been fingered in corruption acts, adding that the commisson did not go after them during their tenure because of their constitutional immunity.

He, however, disclosed that the EFCC had within the first quarter of 2019 secured 194 convictions, as it was committed to ending corruption in the nation.

“From January 1 till today, we have secured 194 convictions. All our cases were at the High Courts. We have to follow the rigours of High Court. Most of the cases did not start this year but we concluded them this year,” he disclosed.

Meanwhile, Magu, has alleged that recent discovery by the Commission showed that some foreign nationals sponsor terrorism through banks in the country.

Magu also lamented that banks were being turned into fraud and money laundering institutions in Nigeria, saying that some bankers give cover to fraudsters, corrupt politicians and foreign nationals to operate, vowing that the EFCC would surely stamp out the ugly menace from banks as machinery have been positioned in strategic places.

“You cannot fight corruption in isolation; that is why we are having this meeting today with compliance officers of banks. We have to join hands, including the journalists, to succeed in this fight.

“A lot of laundering activities today are going on in the bank. This is because of what a lot of them do with Bureau De Change agents. We have discovered that many of these operators of Bureau De Change are foreign nationals.

“Banks give them chance and they launder our money and they finance terrorism. Banks also help politically exposed persons to steal funds. They give life to internet fraudsters through Money Gram and Western Union.

“Unfortunately, we now have fraudsters working inside the banks. They subject people’s account into intimidation and extortion. We want to put our machinery to deal with such bankers,” he said.