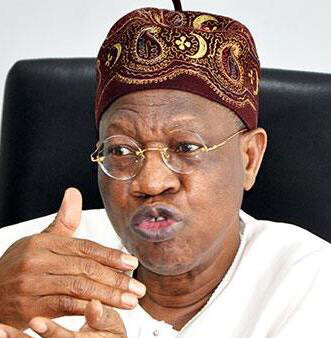 The Minister of Information and Culture, Alhaji Lai Mohammed, has declared that the Peoples Democratic Party, PDP, presidential candidate in the just-concluded election, Atiku Abubakar cannot become president through “subterfuge”.

Mohammed made the declaration while reacting to posters of Abubakar which surfaced in Abuja with the inscription: “The Pukka, H.E. Alhaji Atiku Abubakar, The Real and The Right.”

Addressing journalists in Abuja on Thursday, the minister warned Abubakar against replicating the Venezuelan model in Nigeria.

He maintained that the former vice president cannot become Nigeria’s president through the backdoor because he lost in the elections.

According to Mohammed: “As you must have noticed in recent times, posters bearing the picture of former Vice President and the presidential candidate of the PDP, Alhaji Atiku Abubakar, with the inscription: ”THE PUKKA, H.E. ATIKU ABUBAKAR, THE REAL AND THE RIGHT”, have surfaced across major streets in Abuja.

“The posters and the hiring of US lobbyists, the latest of such by the PDP candidate, have triggered questions about what Alhaji Abubakar is up to. Is he starting a fresh campaign after the elections have been won and lost? Has he rescinded his decision to challenge the results of the presidential election in court, perhaps after realizing that the results he claimed to have obtained from the INEC back server are cooked? Is he now going for self-help? What really is Atiku’s motive?

“Gentlemen, we are aware of media reports that the PDP presidential candidate on Wednesday distanced himself from the posters that are circulating in Abuja. He also reportedly denied hiring US lobbyists, claiming tongue-in-cheek that the APC fabricated the report. If the media reports are right, it means that the former Vice President has suddenly realized the grave implication of his actions, hence has decided to beat a quick retreat before it is too late. As a self-avowed democrat, he should realize that the only lawful channel for challenging the result of an election is through the courts. Resorting to self-help, as he seems to be doing now, is an act of desperation and the consequences are dire.

“There is no doubt that the PDP presidential candidate, out of desperation, is thinking of replicating the Venezuelan model right here in Nigeria. But he should realize that Nigeria is not Venezuela, and that the situations in both countries are not the same.

“President Muhammadu Buhari won the Feb. 23rd 2019 presidential elections fair and square, with a margin of 3,928,869 million votes. The election’s credibility was attested to by local and foreign observers.

“Alhaji Atiku Abubakar has the right to do whatever is lawful to challenge the outcome of that election. But he cannot get through the back door what he couldn’t get through the front door. That will be a pipe dream.

“If he believes hiring a foreign lobbying firm will advance his quest, we wish him the best of luck. But seeking US recognition as the winner of an election that he lost by almost 4 million votes is unconscionable. Recall, gentlemen, that after the result of the presidential election was announced, the U.S. joined other countries to congratulate President Buhari.

“Yes, Alhaji Atiku Abubakar has lost an election. But he will not be the first or the last person to lose an election, and he should realize that losing an election is not the end of the world. He has challenged the result of the election in court. That’s just as well. However, he should not give the impression that he does not have confidence in the judicial process, which is what resorting to self-help implies. He should stop overheating the polity and quit trying to instigate a political crisis in Nigeria. No citizen, no matter how highly placed, is above the laws of the land. Enough is enough!”