Sudan’s President Omar al Bashir has been ousted and arrested by the army which has taken control for the next two years, the country’s defence minister has said. 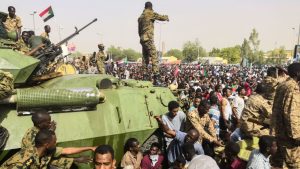 Awad Mohamed Ahmed Ibn Auf said Mr Bashir – who seized power in a coup in 1989 – had been detained “in a safe place” and that a military council would run the country for the next two years.

In a statement broadcast on state TV, he declared a state of emergency for three months and said elections would be held at the end of the 24-month transitional period.

In January the autocratic leader had warned the “rats to go back to their holes” and said he would step down only for another army officer or at the ballot box.

“They said they want the army to take power. That’s no problem. If someone comes in wearing khaki, we have no objection,” he said at the time.

The move to topple him from power comes after months of anti-government protests against his 30-year rule, in anger over a struggling economy.