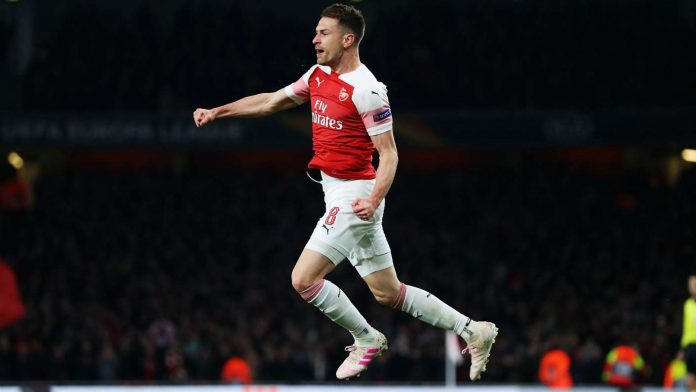 The Welshman’s performance against the Italian giants in the Europa League drew strong praise from the Gunners boss post match.

Juventus-bound star Ramsey opened the scoring in Arsenal’s impressive performance at home to Serie A side Napoli in London on Thursday.

Wales midfielder Ramsey will leave the Emirates Stadium for Italian champions Juve at the end of the season and Emery praised the 28-year-old’s display and commitment, with Arsenal still fighting to finish in the Premier League’s top four.

“Awesome. Awesome, his [Ramsey] performances in this moment for us,” Emery told reporters. “I think he wants to do something important with us.

“To help us do something important because, I think, he feels a lot for Arsenal as a club. And when he’s here with our supporters he gives us more than all he can and gives us the best performance. Not individually, but thinking in the collective.

Following Ramsey’s 14th-minute opener for Arsenal, Napoli defender Kalidou Koulibaly scored an own goal as the home side moved 2-0 ahead 11 minutes later.

Napoli struggled to impose themselves on the contest after Lorenzo Insigne and Piotr Zielinski wasted big opportunities away from home.

Reflecting on the result, Emery said: “50 per cent [happy] because we know the first leg was very important for us to take a good result and a good feeling with our supporters with this competition. I think we deserved the result.”

“We know it’s going to be very difficult there,” he added. “Their performances at home are usually very strong this season. They are going to use all their possibilities, their attacking possibilities there for a comeback. Our objective now is to continue being competitive.”

Next up for the Gunners is a crucial Premier League clash away to Watford on Monday night, before the second leg against Napoli three days later.

Emery’s men are chasing qualification for next year’s Champions League, which they can automatically qualify for by winning the Europa League come May.