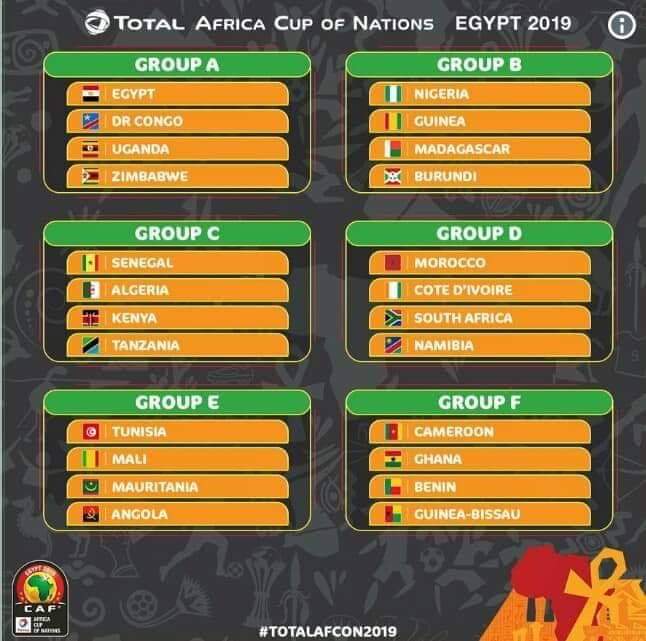 Nigeria’s Super Eagles have been handed what some have termed a comfortable group at the 2019 Africa Cup of Nations after being drawn against Guinea, Madagascar and Burundi.

The group is seen by some analyst as comfortable, in that Madagascar and Burundi are debutants at the AFCON, hence the Eagles are expected to get an edge over them based on experience.

Though Madagascar was actually the first to qualify for the 2019 AFCON with two games to spare, Nigeria has won the competition three times and the Eagles will be making their 18th appearance at the AFCON.

Meanwhile, Africa Cup of Nations hosts Egypt, winner of the competition a record seven times, was grouped with the Democratic Republic of Congo, Uganda, and Zimbabwe at a spectacular draw ceremony held in Giza on Friday.

Group F in the 24-team tournament brought together the second and third most successful sides in its history.

Cameroon, who won their fifth continental crown last time and were originally set to host the competition, will face four-time winners Ghana.

Group D has been dubbed by some as the group of death, it has three former winners, Morocco, Ivory Coast, and South Africa, as well as Mali in it.

— Tournament starts on June 21 and ends on July 19

— Six venues will be used: three in Cairo and one each in Alexandria, Ismailia, and Suez

Lampard: James wonderstrike had me off my seat!

Thiago Silva: I don’t understand what is wrong with Chelsea