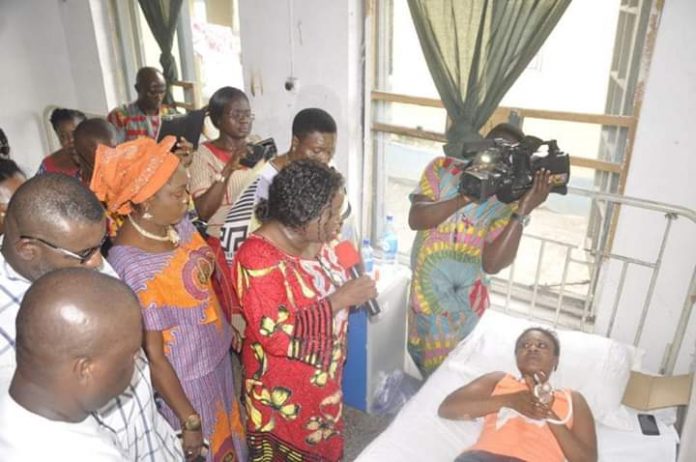 Wife of Abia State Governor, Mrs Nkechi Ikpeazu, has visited Miss Esther Ibem Nmecha who was recently attacked and wounded by a Herdsman along People’s Road in the Ogbor Hill area of Aba.

Mrs. Ikpeazu who was accompanied on the visit by the wife of the Deputy Governor of Abia State, Lady Vivian Ude Oko Chukwu and the Aba North Local Government Chairman, Barr Charles Eseonu, sympathized with the victim who is currently receiving treatment at Aba General Hospital. She disclosed that her husband, Governor Okezie Ikpeazu, was aware of the incident and has directed that Esther be given all the needed medical support.

“I just came back and heard about what happened and I decided to come by myself. The governor has said that the government will settle her medical bill.

“I am therefore pleading with the hospital’s management to do whatever they can do and be assured that government will take care of the cost.

“I know that the man who did this is already in the custody of security agents and the government is not keeping silent. Something must be done to see that we don’t have this kind of thing again,” she said.

Speaking to journalists, the Chief Executive, Hospital Management Board of Abia State, Dr. Ngozi Nduka said that efforts are on ground to pull specialists to see how the victim can still make use of her severed left hand fingers.

“We have prosthesis. We are going to invite plastic surgeons to see what they can do. The fingers are already off. We are not going to fix them back because they didn’t come with her to the hospital.

“She came here without those fingers. If the Plastic surgeons want to have her fingers fixed with prosthesis (artificial fingers) then she can still use those fingers.

“Thank God it is her left fingers except if she is left handed. So, I believe that with the plastic surgeons coming in, there could still be some form of rehabilitation to ensure that her fingers are still usable.”

Nduka who said she cannot estimate the exact amount the surgery may cost, went further to state that such procedures are costly.

She expressed appreciation to the Abia first lady for her visit and assurance that the government will pay the medical bill involved.

Also speaking, the Transition Committee Chairman of Aba North Local Government Area, Barr. Charles Esonu, assured that he would make sure that the attacker, Garuba Salisu, who is already remanded in prison would face trial.

Esonu further disclosed that he has started interacting with the Hausa-Fulani community in the local government area to ensure that there would not be recurrence of incidents like that.