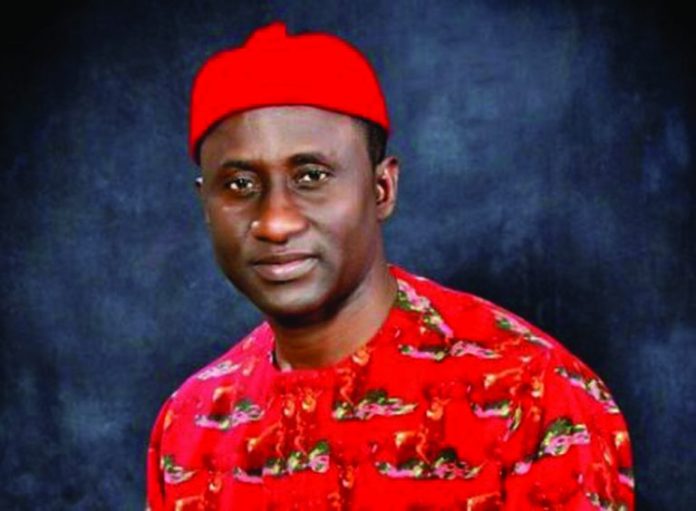 Those that say money making is an art and Dr. Uchechukwu Sampson Ogah, OON, is a maestro in the field seem to be right.

The Oke Oji of Abia and CEO of Masters Energy is a big player in the oil and gas industry and he plies his trade in such a way that makes many of his competitors green with envy.

Indeed, he enjoys uncommon grace so much so that he now sits atop a multi-million Naira conglomerate with various subsidiaries in oil & gas, banking, insurance, aviation, shipping, dredging, logistics, construction, hospitality and power.

He started out as a banker, but he later dumped banking 15 years after to pursue his dream. In reminiscence, the decision has paid off hugely. Today, his firm owns a 158,000- metric tonne capacity independent petroleum products storage facility located in Port-Harcourt, which is reported to have provided direct employment to over 600 people and created over 4,000 indirect jobs for communities in the Niger Delta region.
In addition, he is said to be constructing an industrial city at Onuaku -Uturu in Isikwuato Local Government Area of Abia State, which is expected to provide 14,000 jobs on completion in the next few months.

The factories, which include plants that will produce petrochemicals, lubricants, organic fertilizers, plastics etc., are reported to have achieved an 80 percent completion status, and will be ready for commissioning in a couple of months. Unlike many other billionaires, he has used his money to assist thousands in the state as well as neighbouring states.
So, when he threw his hat into the ring of politics, people in his state danced for joy and jubilated because they were quite sure that a messiah had arrived at last.
For those who do not know, Ogah stands like a colossus in the area of philanthropy.

He has single-handedly provided electricity for villages, changed the landscape of a whole village by building prototype houses and offered free medical services for citizens of the community. He has built and equipped the modern hospitals in his native Uturu community in Isikwuato Local Government of Abia State and also offered scholarships to both primary and secondary students in the same community since 2006. He has also partnered Hopeville Rehabilitation Centre, Uturu for fabrication of Prosthetics (artificial limbs) or Orthotics (calipers) for so many physically challenged people. These are in addition to sponsoring many people to India for various medical issues.
In 2011, he took his humanitarian gesture to a higher level when he established the Uche Ogah Foundation. He also instituted a chair at the Abia State University and is building an auditorium in the same university.

Little wonder, his name is not just one of the most popular names in Abia State today, it is also a name that is associated with positive impact on the lives of the people and a struggle for the liberation of the state. So his entry into politics was fuelled by his determination to provide quality leadership to Abians and to help them achieve enduring social uplift. A source disclosed that in 2015, Ogah contested his party’s primary in the Peoples Democratic Party, PDP and defeated other notable politicians in the state, including a deputy governor, minister, but the manipulation was simply out of this world just like the last election.

‘’In 2015, Ogah was not squarely on the ballot for an obvious reason: manipulation. But in 2019, he contested against six other great sons of Abia and won his party’s primary, thereby becoming the candidate of his great party and a nightmare to the subjugators of Abia people and election riggers. He gave a good account of himself in the general election, having been voted for overwhelmingly by themajority of Abians. This is the truth which will eventually be revealed when the issues raised at the tribunal are determined and those who truly lost the election will be known.

‘’Dr. Uche Ogah is very much aware that politics is a process and not an event. He is also very much aware that the struggle to liberate Abia from the stranglehold of political merchants will be an onerous task and definitely not a day’s job. He has also been careful to ensure that due process is followed and that no life is lost. He is ready to make this sacrifice and he hasn’t failed.

Communique Issued By The PDP Governors’ Forum At The End Of Their Meeting At Aba, Abia State Of Nigeria

We Will Fight Economic Saboteurs To A Standstill, Says IGP

You Are Afraid of Your Own Shadows, PDP Replies Buhari, APC

Electoral Act Amendment: No Party Has Right To Impose Its Processes...

We will continue to serve, put smiles on faces of Edo...