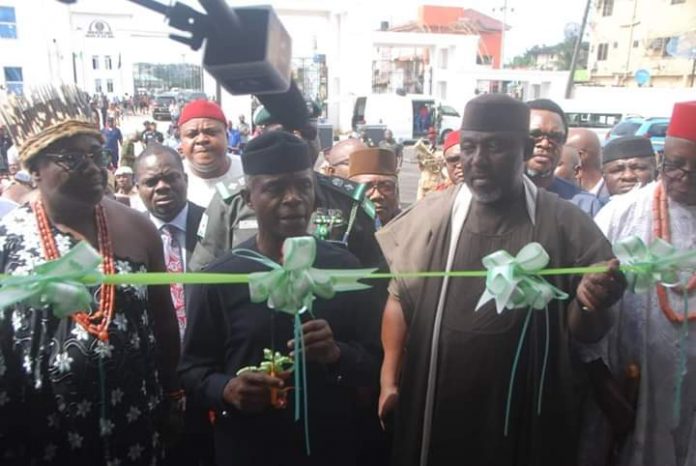 – Says He Has Succeeded As Imo Governor

Governor of Imo State, Rochas Okorocha has slated that the passion he has for Imo made him a crazy man and that he was in hurry to change the situation.

Speaking during the commissioning of projects in the State, Gov. Okorocha said that the Imo International Exhibition Centre has been renamed Professor Yemi Osinbajo exhibition Centre, adding that local products would always be on display in the place even for export, while the four buildings inside the Complex represent the four market days in Igboland including Afor, Eke, Orie andNkwo.

His words “Your Excellency, you’re here and I invited you to come and commission some projects in Imo State. Few years ago when you visited Imo, you advised me that I must make my works known to the people and I disagreed with you taking excuses that there was no need to commission projects because when I consider the money involved in commissioning a project, it would give me money, to construct another classroom elsewhere. But as time went on, I have come to realize that the advice you gave to me was simply of wisdom.”

He added “Though I have taken the advice very late, that’s why I was calling you to be among the first that will commission some of these projects to actualize the advice you had given to me. I have spent 8 years Mr. Vice President. 18 hours out of the 24 hours in a day, I am on the road working. And for the past 8 years, I do not know of any night that I have gotten 3 or 4 hours of sleep. My passion for Imo made me a crazy man, and I was in a hurry to change the situation”.

He continued “May I inform you sir that I am proud today standing as an outgoing governor, that the State Capital I met, the village I met called Owerri, is now wearing a look of a State Capital. This is the joy and one of the legacies that I have seen which history will bear me witness. But had I taken your advice, I’m sure the entire Nigeria would have known what is happening in Imo State. Infact, this is why I’m being misrepresented and misconstrued in all my effort to develop Imo State. And in reply I say to them that they are misrepresenting facts. And all these people are only good in recognizing negativities than positivities”.

The governor stressed “But here when you come, you see that the facts speak for themselves. Now that you’re here, I pray that God will give you the energy and strength to be able to commission upto 50 projects within the next 3 hours. Mr. Vice President, when I realized that it was impossible to commission over 1000 projects is Imo State, as a smart man, I did television commissioning, I embarked on on-line commissioning for the first time in the history of Nigeria”.

Some of the projects Commissioned by the Vice President apart from the Exhibition Centre include, the Government House Clinic, the Ultra-modern Governor’s lodge, Odenigbo Guest House, first lady’s office complex, Sam Mbakwe road, Nnamdi Azikiwe road, Assumpta road, among others.

The Vice-President, Prof. Yemi Osinbajo has Commissioned a number of projects in the State built by Governor Rochas Okorocha, Congratulating the people of the State for the great achievements of the governor.

Prof. Osinbajo said, while Commissioning the Imo International Exhibition Centre Owerri on Friday, May 17, 2019, that he “could testify of the great things the governor has done in the State”, describing him as a great achiever.

He Stated “I have gone round the state on several occasions to look at so many projects that the governor has done. As a matter of fact, on one occasion, we went to see one of the Universities that he had just completed. When I went round that University Complex, I realized that there is simply no other University that has the kind physical facilities like that University has, at least in the history of Nigeria”.

The Vice-President remarked “So, I felt that it’s very important to recognize what His Excellency has done in these past 8 years. He is extremely commendable and I don’t know like many others, that have done the amount of work especially in infrastructure that he has done, Schools, hospitals etc. I’ve also commissioned hospital premises of the Airforce, the Police and others like them at 3 or 4 places. A lot of these projects like he said are not advertised or published in any way”.

He added “I’ve always found him very strange. I must say so because he’s otherwise someone who is not quiet but decided to keep quiet about his achievements. I’ve not been able to understand that because anybody who knows him will not say he’s a quiet man”.

I wait to say that he has done extremely well in this past 8 years and sometimes his contemporaries will chose to make loud noise for very few they have achieved”.

Prof. Osinbajo stated “Your Excellency, what you have done is truly commendable and I’m sure that posterity will not forget you in a hurry. I am here to Commission 50 projects, but I am 62 years old so I will do what he did yesterday (Thursday) when he commissioned some of the projects on-line”.

Two Bag Three Years Over use of Counterfeit Notes

We May Lockdown Again If Cases Spike – FG