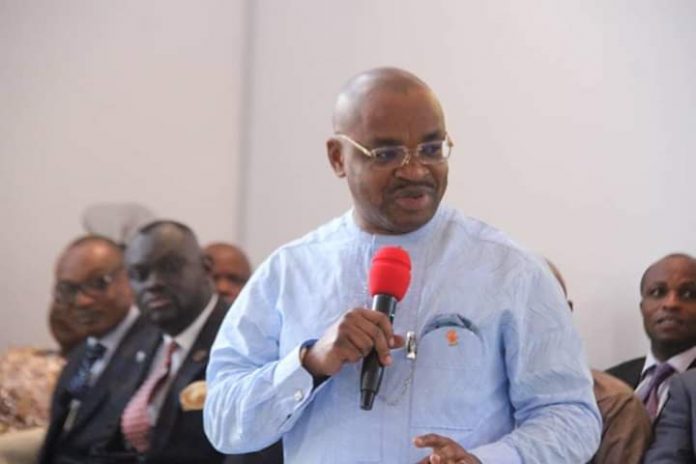 Local Government Areas that does not allow development projects to thrive due to insecurity issues would forfeit such development efforts in their domain.

He said that security is every citizen’s concern as such people should be mindful of activities around them and particularly frowned at the recent abduction of a Syrian Road construction expatriate, Mr Gassan Nasser working with Zenith Construction Company in Uruan Local Government Area of the state.

Governor Emmanuel wondered how the people who had no road infrastructure could allow hoodlums hijack the contractor and hindered the smooth operation at the site whereas they should be thankful that new roads are constructed in the Area.

He thanked the Security operatives for bursting their hideout and arresting the criminals who he said are cooling their feet at the State Police command while some of the gangsters were mulled down and assured that the long arms of the law which has caught up with this men of the underworld would save as a deterrent to others, stressing that Akwa Ibom is no safe haven for the criminals.

He pointed out that the May edition of the prayer summit is the last for the first tenure and thanked God for his benevolence to the state despite the challenging economic situation in the country at the inception of the administration in May 2015.

He said that a five-man verification committee has been set up to compile the projects executed by his administration in the past four years as well as ascertain the monetary values and amounts collected from the statutory accounts and sundry sources, explaining that the move is to enable him give account of his stewardship to the people.

Governor Emmanuel expressed appreciation to the people of the state, the civil servants, Security Agencies and stakeholders for their contributions to the success so far recorded by his administration and used the occasion to appreciate the Fathers of faith for their dedication to prayers for the success and expressed delight that the various sectors of the state economy has witnessed a remarkable leap in development.

He listed the sectors to include road infrastructure, rehabilitation of the Health sector and across the state, rehabilitation and equipping of schools with emphasis on sciences to prepare the youngsters for the industries and other fields of development.

The state Governor read the only Bible lesson at the service from 1peter chapter 1 verses 18 to 25.

In his exhortation Prophet John Linus who preached on the theme “Redeemed to Reign” said that God has redeemed Akwa Ibom from the curses that besieged the land and country.

The Cleric who took his sermon from first Peter chapter one verses eighteen to twenty five said that Jesus Christ redeemed mankind from the curse of the Law and noted that Akwa Ibom a state named after God should manifest the Glory of God.

Prophet Dr. John Linus wondered how Nigeria a celebrated giant of Africa should become an economic dwarf to other Countries and thanked God for the leadership of the state.

249 more Nigerians back from Libya