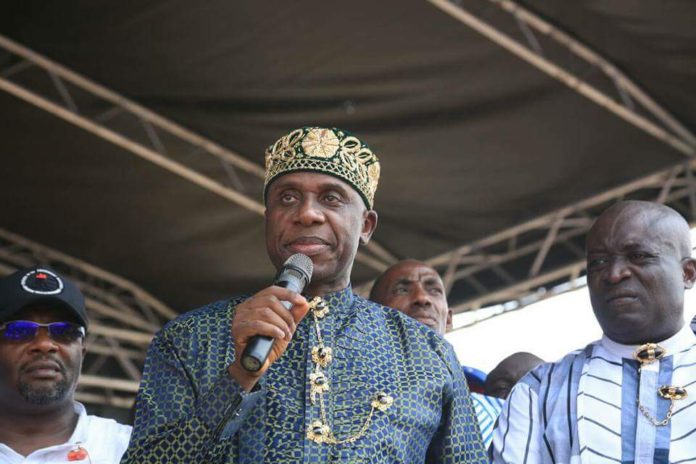 In the past few days, I have followed the hopeless and unnecessary attacks by a few misguided and politically ignorant Igbo sons against the Minister of Transportation, Chibuike Amaechi, because of the truthful comment he made about the Igbo quest for the Presidency in 2023. I read with studied silence the regrettable and unfortunate statement credited to Mazi Okwu Nnabuike, Secretary, Ohaneze Youth Council (OYC), which said Statement was solely aimed at discrediting the personality of DIMM Chibuike Amaechi, an Illustrous Igbo son, Patriot and Nationalist and presently the Transportation Minister of the Federal Republic.

Amaechi predictable assertion to the effect that Ndigbo had by an act of Omission or Commission shot themselves out of the presidency come 2023 is nothing but the truth. To the best of my knowledge as the Secretary General, Ohanaeze Ndigbo, the suspended President General Chief John Nwodo betrayed Amaechi and the Igbo race as he (Nwodo) had earlier spoken with and agreed with him(Amaechi) that Ohanaeze Ndigbo will be neutral by not endorsing any candidate for the presidential election. In 2015 Ohanaeze took this path and failed.

Regrettably, Nwodo and the likes of Mazi Okwu Nnabuike purportedly endorsed Alhaji Atiku Abubakar without affording Amaechi (then Director General Buhari campaign organization), the opportunity to present the reasons for the President’s bid for a second term.

Unknown to the likes of Nnabuike, Amaechi, Ngige, and Elder (Dr.) Ogbonnaya Onu and other Igbo sons and daughters within the All Progressive Congress (APC), are great Igbo Patriots and true Nationalists.

Amaechi and his fellow patriots had argued that it was better for Ndigo to vote massively for President Buhari to provide them the space to politically and morally demand for an Igbo President in 2023. The Question is, if Atiku had won, will Nnabuike be asking for the Presidency in 2023. The obvious answer is no. Amaechi as governor of Rivers State (2007 – 2015) took practical steps to uplift Ndigbo in Rivers State. It is on record that he is the First Governor to appoint an Igbo and non indigene of Rivers State as a commissioner, Mr. Chuma Chinye who was them, the Commissioner for Commerce and Industry.

He also abolished discriminatory fees in all schools and provided a window that made all qualified residents in the state to seek for employment into the State civil Service, and Igbos benefited immensely from this policy.

Admittedly, Amaechi cannot determine the politically future of Ndigbo alone, but he as an Igbo and other progressives can influence the political future of Ndigbo. He has the political and strategic experience and had commanded a campaign organization twice and secured victory twice, while Mazi Okwu Nnabuike and his likes had blindly endorsed failure twice.

Amaechi and others deserves an apology from Mazi Okwu Nnabuike and his Co-travellers.

I had no hand in crisis that consumed you – Keyamo...