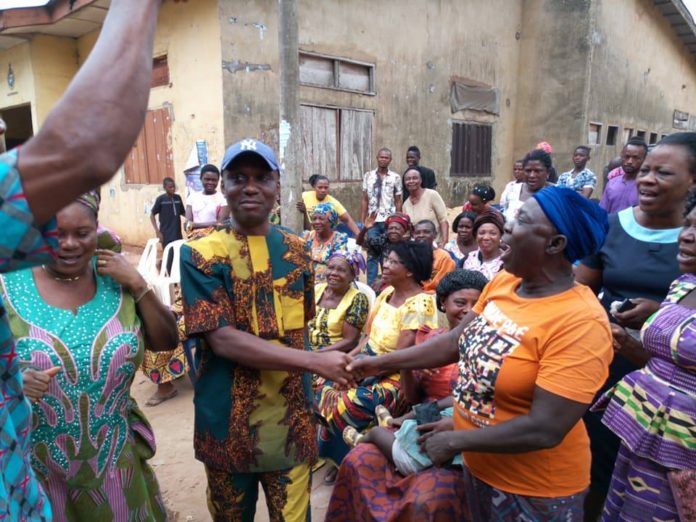 Spread the post
As the inauguration of the 7th Assembly of the Abia State House is gathering momentum with people indicating interest for various principal offices in the House, it has become imperative that Abia people grasp and understand the true person of Hon. Chinedum Orji, the Majority Leader of the State House and by the grace of God the incoming Speaker of the hallowed House.
This clarification becomes much more necessary against the backdrop of the activities of some misguided elements who are going around with campaigns of calumny aim at blackmailing Hon. Orji to achieve their ungodly desires (which of course cannot work). These politictians use
pseudonyms on social media and employ some political jobbers to do hatched job of discrediting Hon. Orji. These jobbers are on an unfortunate ungodly mission of damaging the hard earned image of Ikuku.
They are poisoning the minds of the right thinking members of the society to believe that Hon. Chinedum Enyinnaya Orji, Ikuku, does not mean well for the State. They have already started dishing out their media concoctions through various means, alledging that Ikuku wants to hijack the government of the State and possibly impeach the Governor. This to say the list, is grave falsehood cooked from uncircumcised mouths of politictians whose Ikuku’s sagacity, influence and interest in the Speakership position have relegated to the political boys’ quarters.
Come to think of it, is it not Ikuku’s father that midwifed the shift of governorship position to old Ukwa/Ngwa division and ensured that the same Ngwa man, Governor Okezie Victor Ikpeazu, Ph.D is reelected to continue his good governance in the State, a feat that made him the father of equity in Abia State? If Ikuku was not in support of the father, doesn’t one thinks that he could have influenced the father to act otherwise? Why then should people come up with this unfounded allegations just because, they know that the young man is very grounded and that they cannot beat him in the contest?
For the avoidance of doubt, in the presidential governmental system, there are three branches or arms of government. These are the executive, the legislative, and the judicial. It is common knowledge that the general function of the legislature is to make laws, the executive carries out the laws while the judicial branch interprets the laws when there are disagreements about their application in a given case. Hon. Chinedum Orji as a good citizen knows his boundaries and cannot go against the law. He is at home with the fundamentals of governance of different arms.
After all, the position to occupy is the Speaker and as the Speaker, his opinion in an issue remains his until the majority of the House affirms such opinion. So anyone thinking in that direction is just trying to ignite unnecessary hatred and crises and should not be seen as a good citizen of Abia State. It is equally a sign that such a law maker doesn’t know his left from his right in the law making business. Even a layman knows that one person alone, no matter who he is or the position he occupies cannot unilaterally take a decision on behalf of the entire legislative house.
It is important to understand that the man, Engr. Chinedum Orji is a good person, well-groomed and one who respects the rule of law. He is a gentleman, whose constituents, friends and associates testify of his humility, character and ingenuity. A level headed young man with greater and better vision for the people of the State. His natural endowments and gift have made him a rallying point among his peers and this has made him a celebrated leader and coordinator of renown.
It may not be out of place to assert that Hon. Chinedum Orji
possesses good leadership qualities in his DNA as the father, Chief T. A Orji grew from an Administrative Officer to Chief of Staff to Governor and later two term Governor of the State and currently, a distinguished Senator of the Federal Republic of Nigeria. His mannerism and approach to issues are undeniable testimonies to that fact that he is well-positioned to lead the the 7th House of Assembly and n the State. Hon. Orji is a man, whose dreams and aspirations are that the people of the State would get the best from the PDP and government of the day. The achivements of this quintessential member of the House of Assembly is unparalleled. If he can achieve so much for the members of his constituents and even extended to others, how much more, when he assumes the position of the Speaker of the House? Of course, it is certain that he would influence his colleagues to drive home dividends of democracy to their various constituencies.
Abia people and residents are enjoined to discountenance the information being carried about by those who are bereft of ideas and strategies of how to lobby and woo their colleagues to elect them as the Speaker of the House.
It is instructive that Ukwa/Ngwa nation should not be moved by the antics of non progressive people, whose stock-in-tread is to forment unnecessary political trouble capable of bringing enmity and distrust among the political blood brothers. Ikuku, his family and the entire Ikwuano/Umuahia extraction of Abia Central have championed the issue of equity which made an Ukwa/Ngwa man an eight year Governor like his predecessors, so, if the people that championed the equity seek equity, it is not being ambitious. It should be supported by all and sundry. Campaigns of calumny and distructive criticism cannot stop Hon. Chinedum Orji from emerging as the Speaker of the 7th House, God willing! He is a man with grace and no one should fight a man with grace because no one has ever stopped a man with grace.
Congratulations in advance Hon. Chinedum Orji, the seat is yours!
Arc. Joseph Onuigbo wrote from Ikwuano,Abia.

Quit notice: No one is driving Northerners away from South –...