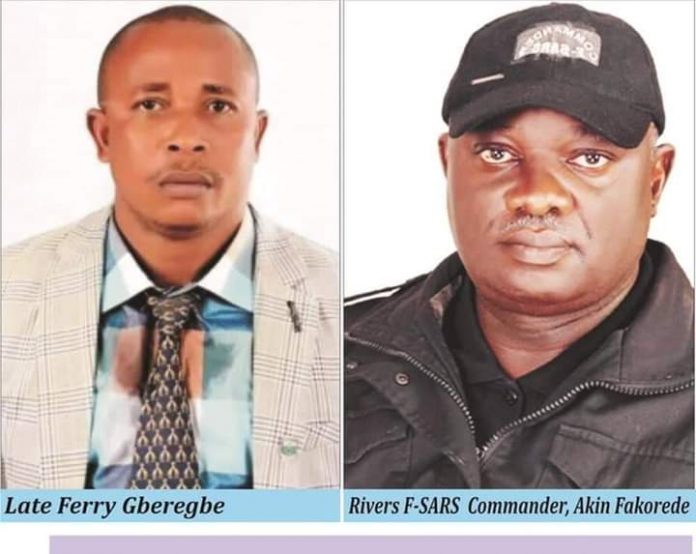 Ronke, the wife of late Dr. Ferry Gberegbe, has filed a lawsuit against the Nigeria Police and Commander of the Special Anti-Robbery Squad (SARS) in Rivers State, ACP Akin Fakorede, over the death of her husband in the 2019 General Elections.

Dr. Ferry Gberegbe was allegedly killed by SARS officers on 10th of March, 2019 when they allegedly opened fire in the INEC Collation Centre in Bori in Khana Local Government Area of Rivers State.

He was a collation agent in the 2019 general elections in the local government area.

Counsel to Ferry Gberegbe’s wife, Barrister Lezina Amegua, said in a telephone interview on Monday that his client filed the lawsuit in a Port-Harcourt High Court and that she has asked for eight hundred million naira damages from the defendants in the case for the violation of her husband’s right to life.

He said that the first defendant in the suit is the Nigeria Police while the second defendant is the SARS Commander in Rivers State, ACP Akin Fakorede.

Amegua said that his client filed a fundamental rights suit through a Fundamental Rights Procedure, which is a special procedure to file a lawsuit in court involving fundamental human rights.

He said that the fundamental rights procedure is used when someone’s rights have been “infringed upon”, explaining that his client is asking for damages because her husband’s right to life was violated.

It will be recalled that some witnesses alleged that SARS Commander in Rivers State, ACP Akin Fakorede, allegedly gave an order for the shooting on 10th of March, 2019 at INEC Collation Centre in Bori in Khana Local Government Area of Rivers State in the 2019 general elections.

They made the allegation when they testified before the State Judicial Commission of Inquiry, set up by Governor Nyesom Wike to investigate the “remote and immediate” causes of the violence and killings and other related acts and matters which allegedly occurred in the February 23rd and March 9, 2019 General Elections in Rivers State.

The commission, among other terms of reference, was to also identify sponsors and perpetrators of the various acts of violence and killings which allegedly occurred in the state in the 2019 general elections.

One of the witnesses, Hon. Thomas Bariere, who appeared before the commission had said: “Election took place across Khana Local Government on the 9th (of March) and result collation equally commenced at the end of the election on the same 9th and continued till the 10th because Khana has over two hundred and ninety something units. On the 10th, being Sunday morning, while we were at the collation centre, the State Commander of F-SARS, ACP Akin Fakorede and his team drove into the INEC office where we were and on his arrival, the Bori DPO asked all of us to leave the premises.

“What happened was, while we were outside, myself and my late colleague, Dr. Ferry Gberegbe by the fence, he (Dr. Ferry Gberegbe) called my attention and said, ‘Boy, see Gregory, see Eric, see Emma, from that vehicle they are entering INEC office’. As all agents of PDP, we now decided to also enter into the premises and on entering the premises, I and Ferry Gberegbe rushed to the window of the collation hall and saw the DPO of Bori Police Division (and) one Dr. Leelee and these APC stakeholders. At that point, we started shouting at them that they cannot subvert the will of the people and we started singing that God has given us victory. While we were singing, one of the SARS officers was having a conversation with his principal, the commander, Akin Fakorede, who was seated at the front (seat) of a vehicle (and) as soon as he (SARS officer) left the vehicle, he (SARS officer) just gave a signal and turned and two other SARS officers who were by the gate walked in.

“As soon as they walked in, they started giving sign for us to move back. What followed was teargas and the place became smoky and while we were trying to retreat, they started shooting. The sporadic shooting was so severe that we all had to take to our heels (and) while we were running, I saw my brother and friend, Dr. Ferry Gberegbe, going down. As soon as I got there and saw him, I shouted, ‘They have shot Ferry oo. They have shot Ferry oo, That SARS has shot Ferry’. Other sympathizers who were around rushed and then they carried him and I had to run towards where his vehicle was parked and I said that they should bring his vehicle”.

Amegua said that the case will come up for hearing before Justice Adolphus Enebeli on Wednesday (today) 22nd of May, 2019.