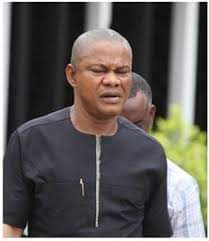 The Economic and Financial Crimes Commission, EFCC, on Thursday, May 23, 2019, secured the conviction of a former acting Director-General, Nigerian Maritime Administration and Safety Agency, NIMASA, Callistus Obi. Also convicted was Alu Dimas, an aide to Patrick Akpobolokemi, a former Director-General of NIMASA. They were convicted by Justice Mojisola Olatoregun of the Federal High Court sitting in Ikoyi.

The duo were arraigned alongside two companies, Grand Pact Limited and Global Sea Investment, on April 12, 2016 on an eight-count charge bordering on conspiracy, conversion, and money laundering to the tune of N136million (One Hundred and Thirty Six Million Naira).

The prosecution proved that the convicts converted the sum of money, N136million, belonging to the Agency to their personal use on August 5, 2014.

One of the counts reads: “That you, Callistus Nwabueze Obi and Dismas Alu Adoon, on or about the 5th day of August 2014, in Lagos within the jurisdiction of this Honourable Court, did conspire amongst yourselves to commit an offence to wit: Conversion of the sums of N111, 000, 000.00 (One Hundred and Eleven Million naira) property of NIMASA, knowing that the said sums were proceeds of stealing, and thereby commited an offence.”

The defendants pleaded not guilty to the charge preferred against them, thereby leading to their trial.

In the cause of the trial, the prosecution called eight witnesses and tendered several documents, which were admitted in evidence by the court.

At the resumed hearing today, Justice Olatoregun discharged and acquitted the defendants of the charge of conspiracy preferred against them.

The Judge, however, convicted them of conversion and money laundering.

The Judge said: “The prosecution has proved the charges preferred against you beyond reasonable doubt with evident conversion and money laundering of N136million”.

Justice Olatoregun, however, deferred sentencing to May 28, 2019 and ordered that the convicts be remanded in prison custody.