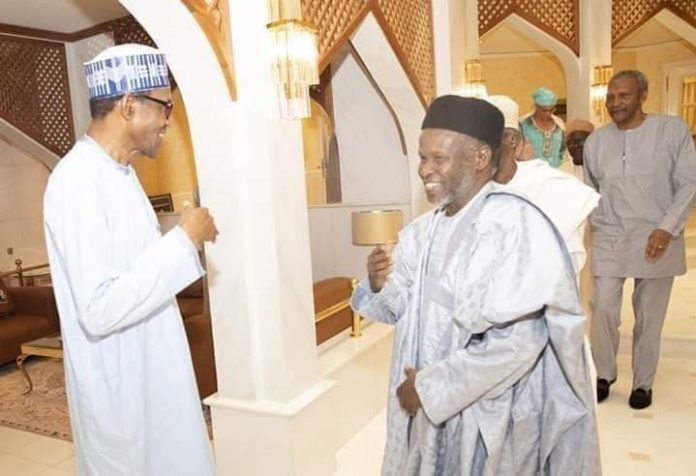 An unsavoury dinner has just taken place in Aso Rock Villa. The Acting Chief Justice of Nigeria (CJN), Tanko Mohammed, was caught on camera in a dinner session with President Muhammadu Buhari. The CJN had a full retinue of Supreme and Appeal Court justices, including members of the Presidential Election Petition Tribunal at the dinner. They were at the Villa to break the Ramadan fast with the president.
If you ask me what my grouse with this high-powered dinner is, I will quickly retort by telling you that there is something distasteful about the meal. It is sour in every sense of the word because of the secrecy that was brought to bear on it.

Before their lordships were feted at this presidential dinner, some other high-ranking government officials, including the leadership of the legislative arm of government, had had similar dinners with Mr. President. But there is a difference. The dinner for the other stakeholders was in the public domain. They were announced to the Press. The public was very much in the know. But that was not the case with that of their lordships. Theirs was kept under wraps. It took some kind of whistle-blowing for some of us to know about this meal that has all the trappings of compromise.

Why were their lordships ferreted into Aso Rock and treated to a sumptuous evening without Nigerians being put in the know? That is the question that is begging for answer.
Now, let us go into the substance of the matter. I have a problem with this dinner because of the issue we have on our hands. The Nigerian judiciary is on trial because of the 2019 presidential elections. The received impression in many homes in Nigeria is that the election in question was won by Alhaji Atiku Abubakar, the presidential candidate of Peoples Democratic Party (PDP). President Buhari of the All Progressives Congress (APC) is largely believed to be holding a stolen mandate. It is this disputed outcome of the election that Atiku and his party, the PDP, have gone to court to challenge.

But an issue as testy as this cannot be resolved by a corrupt and compromised judiciary. The independence of the judiciary, the world over, is almost taken for granted. The judiciary is the last hope of the common man. It is the bastion of democracy. It is expected that the judiciary will stand firm and courageous when democratic institutions are being abused and trampled upon by corrupt politicians.

Not too long ago, the judiciary in Kenya, an East African country, made the world proud when its Supreme Court upturned the result of the 2017 presidential election in the country owing to widespread electoral malpractices. Since that courageous step was taken in Kenya, the world has been holding the Kenyan judiciary aloft as the beacon of hope for democracy in Africa, nay in the world. The judiciary in Nigeria may not have attained this enviable height, but Nigerians are hoping that our courts would, one day, help to right monumental wrongs. This is where we stand in Nigeria of today.

It was on the strength of this delicate situation that Justice Zainab Bulkachuwa, the President of the Court of Appeal who also assumed the chairmanship of the Presidential Election Petition Tribunal, was asked to recuse herself from the trial because it is believed that she is an interested party in the case. I will not bother you here with the details of the assumed and presumed weaknesses of Justice Bulkachuwa in this matter. Suffice it to say that she has since recused herself even though she did so in a pretensious manner. Our hope is that the other Justices on the panel and whoever that will take over from Bulkachuwa will do justice in this matter without fear or favour.

But we are constrained to say that members of the presidential election petition tribunal have started on a disappointing note. Their ruling that there was not enough reason for Justice Bulkachuwa to recuse herself from the case is bizarre. How they decided to ignore judicial precedents and decided cases in this matter beats the imagination. Is this their skewed judgment a foretaste of what to expect from them in the case before them? We hope it is not. Nigerians are still waiting for them to dispense justice in a manner that will not make our judiciary a laughing stock.

You can now appreciate my agony when the matter which we are trying to resolve at the Appeal Court level is being entrenched at the Supreme Court. It must be noted that Justice Tanko Mohammed was appointed in controversial circumstances. He was chosen to replace Justice Walter Onnoghen, the deposed CJN who Buhari suspended in circumstances that were less than decent. Analysts have since linked Onnoghen’s deposition to the presidential election case we have on our hands. All the talk about non declaration of assets by the former CJN was bunkum and a mere afterthought.

Given this set-up, it will be most unconscionable for Justice Tanko Mohammed to do anything that will throw him open to suspicion. Since he is believed to be the president’s special nominee, he must tread with caution. He must be seen to be an impartial arbiter who will not be compromised by sticky meals.

The fact that the presidential dinner under reference took place in secret is worrisome. The impression it conveys is that the concealed meal may be one of the sessions that will be put in place to compromise the justices, particularly the CJN in the ongoing presidential election petition trials. The development is most reprehensible, to say the least. It sends uncomfortable signals to the watching world.

Justice Mohammed must retrace his steps. He must also watch his back. He must bear in mind that it will be imperative that he recuses himself from the case if he cannot maintain the neutrality expected of him. Nigeria must overcome a compromised and corrupt judiciary which cannot save the country from itself. The ongoing presidential election petition will be a case to end all cases. Our lordships must watch what they do because the world is watching.

That is why I shudder at the fact that their lordships did not see anything wrong with the secrecy that attended their outing. Considering the fact that other dinners that held before theirs were publicized, their lordships should have spared a moment to ask why theirs was made a top secret.

Circumspection is paramount here because of the case before them. They must realise that they are being looked up to resolve many of the thorny issues that the 2019 presidential election has thrown up. A cavalier disposition such as the one Tanko Mohammed and his entourage displayed in the instant case will not serve anyone’s purpose in this matter. They should come off it and stay guided.

The nPDP: The Nomadic Tribe Of NIGERIA’S Politics