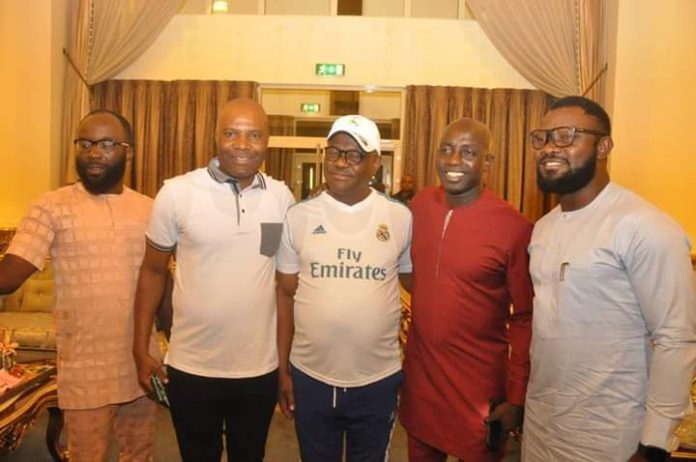 Prominent Former Nigerian Internationals have praised Rivers State Governor, Nyesom Ezenwo Wike for promoting sports for the empowerment of youths in the state.

In an interview with journalists at the Government House Port Harcourt on Friday night, they called on Governor Wike to sustain the investment in sports.

Former Nigerian Winger, Finidi George said that he was impressed by the results attained by Governor Wike in the area of sports.

Finidi George said: “His first four years have been great in many aspects. He is always promoting sports. We can see what he has done at the Madrid academy and we are looking forward to him doing more in his next tenure. We are happy to be here and to pray for him to really do more in sports and we will always be back here to support him in whatever thing he will need from us as ex football players.

” He has done a good big job. We look forward to seeing more.I really love it,the stadium was filled up. We had a good game and we enjoyed it ”

” If we can have more of him in Nigeria, grassroots football will develop. What he is doing at the academy is one of the keys that will help the youths”.

He said: “I have been quite away from Rivers state for sometime. Since I came back to Nigeria in 2009, I have been busy with activities of sports development till date. If there is any governor in this country that I have heard of his love and passion for sports, it is the governor of Rivers state. This is the man that has been reviving sports.

“I want to go deep into what Governor Wike is doing for the people of Rivers state. He is reviving the State, he is giving hope ,life to the people. He has a deep understanding of what sports can do for the country.

“For the people of Rivers state, I am a Rivers guy. I am from Opobo,I started my football career from Port Harcourt, from Sharks as a young boy. I played for Blue Angels under 13 team. I was made here. I am a product of Rivers state and at large Nigeria. I was not made in Europe. So what he is doing now is to make talents, is to make our Rivers youths, he is now reviving the beauty of sports.

” Rivers state, this is the kind of leader we need and as such we owe him that support. We have to be by him,we have to support him, pray for him”.

Wike To Edo People, Use This Election To Liberate The State