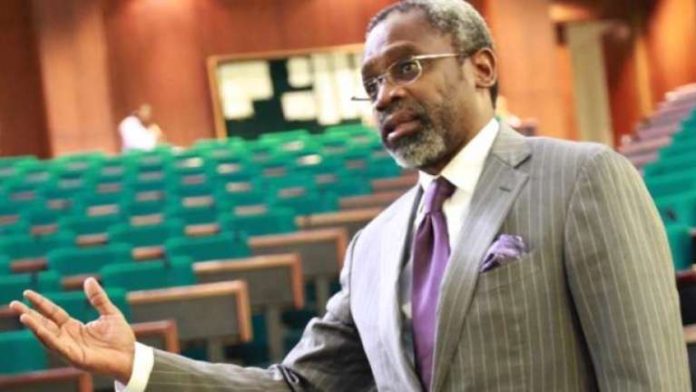 The All Progressives Congress (APC) was on Sunday, asked to prevail on Hon. Femi Gbajabiamila to step out of the contest for speakership of the 9th House of Representatives, on account of alleged misdeeds in the United States.

Gbajabiamila is the frontrunner in the contest for Speaker of the House of Representatives and has been endorsed by the party leadership and his aspiration is believed to be the pet project of national party leader, Asiwaju Bola Tinubu.

But the national chairman of APC, Comrade Adams Oshiomhole was told in a fresh petition on Sunday, that the outgoing House leader lacks the reputation to hold the office of the number four person in the country.

The petition follows a court action initiated by a taxpayer, Philip Undie to stop Gbajabiamila from the contest on the basis of some of the allegations leveled in the petition to Oshiomhole.

The petitioner, Basah Mohammed, who is the editor of Corruption Reporter Communications Limited in the letter to Oshiomhole dated 23rd May 2019 accused the outgoing House leader of double identity and multiple fraud allegations in the United States. The petition also alleged that Gbajabiamila had been disbarred in Georgia, United States of America.

The letter to Oshiomhole which was copied to several security agencies read thus:

“We are a registered media organization committed to good governance and accountability in public office through factual reportage.

“We are constrained to write you in respect of the above as the chairman of the All Progressives Congress; the ruling party and the party with majority members-elect in the incoming 9th National Assembly House of Representatives due for inauguration in June, 2019.

“As a leader of the Party which prides and proclaims itself as a party of change and founded on the principles of integrity and avowed fight against corruption, it is imperative that anybody that will occupy any visible political position should and must not have integrity deficit on account of their profile.

“The seriousness and commitment of your party’s administration to maintain and reposition our country’s ebbing international trust and respect will be appraised from the perspective of the choice of persons for political positions both elective and appointive.

“The position of Number Four Person in the country is a very crucial one; a collegiate leader in the Nigerian National Assembly. Therefore, any occupier must be above board in integrity and reputation for us to be taken seriously in the comity of nations.

“It is therefore incumbent upon you as the leader of the party to ensure that due diligence is carried out on anyone aspiring to hold this very important position which will be critical to the success of your party’s government and the overall sustenance of democracy in Nigeria.

“We wish to note that once again our national image and reputation may be hanging precariously on a very tiny string of morality tenterhooks in the international image.

“We most respectfully provide for your consideration and deep reflection the following about one of the aspirants.

“That one Honourable Femi Gbajabiamila or Femi Gbaja has a record of Social Security Number Fraud in the United States of America (Please find full details in the attached annexure 1).

“That one Honourable Femi Gbajabiamila or Femi Gbaja has records of duplicity of date of birth in the United States of America (Please find full details in the attached Annexure 2).

“That one Honourable Femi Gbajabiamila or Femi Gbaja was convicted by the Supreme Court of the State of Georgia, United States of America for professional misconduct for converting $25,000 (Twenty Five Thousand Dollars) that belonged to his client and fled to Nigeria for which he was duly sanctioned (Please find full details in the annexure 3).

“That one Honourable Femi Gbajabiamila or Femi Gbaja operated under different names from 12th January, 1998 to 5th January, 2002 in the United States of America (Please, find full details in the attached annexure 1).

“That one Honourable Femi Gbajabiamila or Femi Gbaja has a record of several infractions of the law in the United States of America bordering on tax evasion and credit card offenses, including unsatisfied civil judgement (Please find full details in the attached annexure 5).

“That one Honourable Femi Gbajabiamila or Femi Gbaja was publicly accused of not paying legal representation fees by Femi Falana, SAN in a suit FHC/ABJ/CS/501/2015. (Please find full details in the attached annexure 6).

“In the light of the above premises, therefore , we are compelled by civic obligations, mutual patriotic duty, national interest over and above narrow prisms of personal interest, partisan motives and considerations to respectfully request you to use your good offices to appraise these reports and take the best decision in the national interest.

“We have resolved to bring these issues to your attention first and foremost since it seems there is a conspiratorial silence from those who should check.

“We are also inclined to take this to the doorstep of the Nigerian people who again will be the real victims of the consequences if we fail to subject those who aspire to lead our nation to the irreducible minimum standards of leadership integrity as obtains all over the world.

“While we await your action, we shall carefully keep our eyes on the developments in the national interest

“In the meantime, we have taken the liberty to forward copies of this letter as well as the attachments to the underlisted appropriate agencies for their information and necessary action.”

Hon. Gbajabiamila could not be reached for a response as at the time of filing this report.