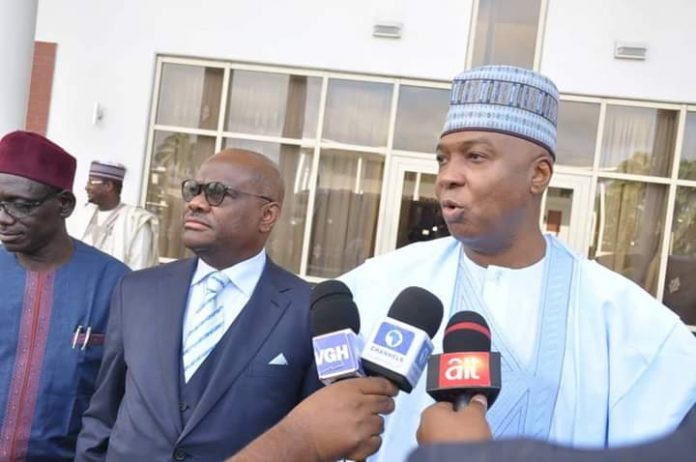 Addressing journalists at the Government House Port Harcourt on Monday after arriving the State to attend the Public Presentation of a book chronicling the achievements of Governor Wike, Saraki noted that there is need for victory celebration

He said: “I am here for the celebration of the victory of our brother, Governor of Rivers State, Nyesom Ezenwo Wike for a second term.

“I am happy to be part of this great victory of Governor Wike and the Good people of Rivers State. This was one of the toughest elections and the people stood by the governor in defence of democracy.

“We are here to celebrate what they fought for. For those who lost their lives, we are here to show that it was not in vain. I congratulate the Governor and the people of Rivers State for this victory”

Also speaking, Governor Aminu Tambuwal of Sokoto State said that Governor Wike’s victory is well deserved, in view of his outstanding performance during his first term.

“I send my best wishes to the governor on this very auspicious event and to the people of Rivers State.

“I commend the people of Rivers State for re-electing Governor Wike to continue with the good works he has started”, he said.