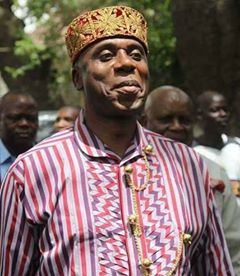 …unveils him as best of Buhari’s cabinet

The Minister of Transportation, Chibuike Rotimi Amaechi, has been described as a beacon of exemplary leadership in contemporary Nigeria and the indisputable leader of the All Progressives Congress (APC) in the South-South region of the country.

A chieftain of the APC in the South-South, who is also an associate of the Minister, Chief Eze Chukwuemeka Eze, who gave the description in a statement issued and circulated in Port Harcourt on Monday, to celebrate the 54th birthday anniversary of Rt. Hon. Amaechi, also encouraged the Minister to stay focused and not be distracted by those intimidated by his sparkling profile.

Recalling memories and experiences of his over-13 years of relationship with Amaechi, Eze said his association with the former governor of Rivers state had blossomed into a union that has become a threat to some greedy, untoward and unprincipled politicians in the country.

He noted that his constant and unapologetic defense of the Minister against his detractors has turned him into something of a terror to many of the political opponents of Amaechi, quoting one of the political leaders from Rivers state, Senator Magnus Abe, the senator representing Rivers South-East Senatorial District, as saying in a recent statement that he had created a larger-than-life figure out of the Minister.

“Senator Abe, in one of his recent statements said I have singlehandedly created a superhuman being out of Amaechi. Truly, Amaechi is a superhuman being as far as politic is concerned in Nigeria. If a man who has been identified as an uncommon Director General of a Presidential Campaign Organization, who has redefined politics in Nigeria and become the first African to lead a political party to two successive and successful electoral victories is not a superhuman being, then I wonder what superhuman being is all about as most of this enigma’s feats are not only legendary and historical, but also epochal.

“Amaechi is a resourceful leader, a dogged fighter, a political enigma, a change agent, people’s defender, transformer, catalyst, trail-blazer, a phenomenon of our time, whose word you can take to the bank. A trusted friend and an ally, a man who stands by his friends and confidants both in good and difficult and challenging times.

“A man of conscience, who does not hide under the veil of circumstances to betray his friends and allies, a compassionate leader, whose love for the development of Rivers state and its people has no parallel. A sincere and honest leader, who rather than cart away the commonwealth of Rivers people entrusted to his care, diligently applied it to the development of the state to the admiration of true Rivers people and even his traducers. A visionary, who knows and sees his people first”, Eze said of Amaechi.

He went further to describe Amaechi as the best Minister in the outgoing cabinet of President Muhammadu Buhari, citing a number of performance markers as his reasons for picking him out as the best among the team, which he said had faithfully and conscientiously served Nigeria in the last less than four years.

“He prepared and forwarded Bills of National Transport Commission and Nigerian Railway Corporation to the National Assembly to enhance regulation and further opening opportunities for private sector investment into critical transport infrastructure. Rotimi Amaechi instilled financial discipline in the Ministry of Transport and its agencies and provided safety measures at the nation’s airports.

“Completion of the Abuja-Kaduna railway line, worked on the standard gauge on the following routes: Calabar-Lagos line, Lagos Seaports; and the Lagos-Kano: Lagos-Ibadan-Ilorin-Minna-Kaduna-Kano and signed an MoU with the Chinese company, China Railways Construction Corporation (CRCC) for investment for the completion of the Itakpe – Ajaokuta – Warri (Aladja Jetty) railway line and from Aladja to Warri town port, fefinery and from Itakpe to Abuja.

“He is making efforts to complete all outstanding rail projects in due time. he Lagos-Ibadan rail line will soon be completed. He is opening up the transportation sector completely to the private sector, saving N53 billion from the ship building fund and through the rebranding of NIMASA.

As Minister of transportation, Amaechi demonstrated his sagacity and prudence in management of public finance by saving a whopping N134.4 billion for the nation (using N168 to $1 as it was in 2014, when the contract was first signed), by negotiating downwards the planned 1,402km coastal rail-line project already approved by the administration of Dr Jonathan at a huge cost. “Rt Hon Amaechi has by this singular act demonstrated to the entire world that he utilised the resources of Rivers State prudently and wisely during his tenure as the governor of Rivers State,”

“There is an on-going rehabilitation of infrastructure at the seaports. He inaugurated the Bakassi Deep Sea Port steering and delivery committee while plans for the construction of Deep Sea Ports in Lekki and Badagry as well as completion of the Lokoja port have begun”, Eze cited as some of Amaechi’s contributions to President Buhari’s vision of diversifying the nation’s economy.

Eze who for the past two weeks penned five articles published by some leading Media outfits on different areas (Security, Education, Agriculture, Finance and other great feats) of Amaechi’s governance showing to the world the great leader he is even as I am convinced that God who have taken him this far will continue to guide him until his vision for this country is actualised no matter the manipulation and evil machinations of our opponents.

He, however, congratulated Amaechi as a great Ambassador of the people of Niger Delta region and pray that as he marks his 54th birthday, he will prepare himself for the great role God is preparing him for in the politics of Nigeria.

Eze expressed gratitude to all Nigerians on this special day for the confidence they reposed on this divine tool in the Hands of God to take this country to the promise land. “I am convinced that with the feats recorded by Amaechi during his days as Governor of Rivers State and as the Minister of Transportation, greater task for rebuilding of Nigeria will be somersaulted no matter the odds.

Eze thanked and reassures most Nigerians who considering my relationship with this great leader of our time sent through me their birthday messages to the Minister that their goodwill messages will surely get to the Minister accordingly.

“Enjoy your special day my brother and God bless you”.