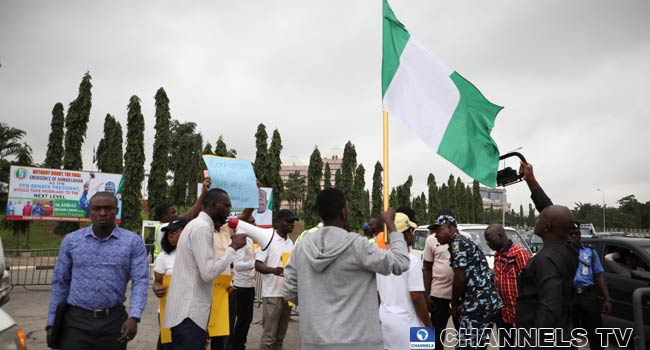 Protesters on Wednesday stormed the National Assembly complex in Abuja demanding the prosecution of Senator Elisha Abbo for assaulting a lady at a sx toy shop.

The protesters including popular activist Aisha Yesufu said the Peoples Democratic Party (PDP) lawmaker, who is representing Adamawa North Senatorial District must be prosecuted alongside his police orderlies.

Senator Abbo is in the eye of a storm for attacking and beating up a woman who tried to prevent him and others with him from assaulting another woman in a sex toy shop in Abuja.

The viral video of the assault sparked outrage with many Nigerians calling for his prosecution.

Abbo has since confirmed to Channels Television that he is indeed the man in the video and that he will release a statement soon in that regard.

Meanwhile, the Nigerian Senate has set up an ad-hoc committee to investigate the case. Six men and two women were chosen as members of the committee which will be headed by Senator Sam Egwu.