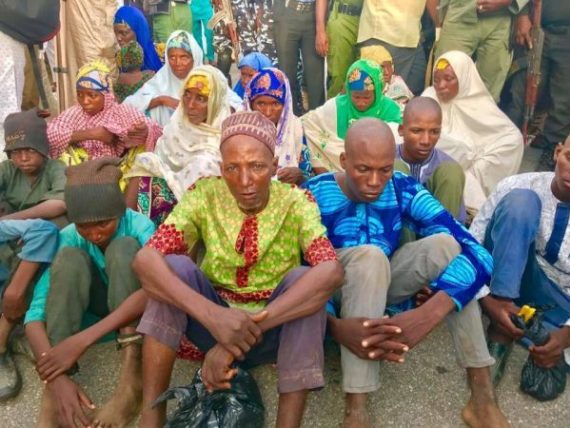 A new deal of rapprochement between the police and bandits is yielding dividends in crisis-plagued Zamfara in Nigeria’s north west region.

On Friday, the Police Command has secured the release of no fewer than 40 people being held in various hideouts by bandits and volunteer vigilante groups.

Gov. Bello Matawalle as part of the agreement, had extended an amnesty offer to bandits in the state to surrender their weapons and embrace peace.

The Police Command also followed the pledge by asking all repentant bandits who had innocent persons in their captivity to release them in furtherance of the peace treaty.

This led to the rescue of initial 25 persons of Fulani extraction comprising men, women and children who were initially held by volunteer vigilante groups.

The 25 victims had been released by their captors in Dansadau Emirate of Maru Local Government Area of the state where they were detained by vigilantes since April 9, this year.

Another 15 persons comprising 13 males and two females were rescued by the police from the hands of bandits operating in the bushes of Shinkafi Local Government Area of the state.

Governor Bello Matawalle centre, with the police commissioner, Usman Nagogo at a reception for the freed men and women

This was confirmed to journalists by the Police Public Relations Officer (PPRO), SP Mohammed Shehu.

He said, “Today being 5th of July 2019, the Commissioner of police Zamfara State Command, CP Usman Nagogo, has once again perfected the release of fifteen (15) kidnapped victims from the hands of armed bandits in Shinkafi LGA.

“It will be recalled that yesterday 25 Fulani’s abducted by YANSAKAI volunteer group since on the 9th of April, 2019 were successfully released to the Commissioner of Police who later handed them over to the state executive governor,” the PPRO stated.

In his response to the development, the National Chairman of the Miyetti Allah Cattle Breeders Association of Nigeria, Alhaji Mohammed Kiruwa applauded the efforts of the state government and Police Command for the initiative.

He expressed confidence that all victims under the captivity of the bandits would soon be released to the government in order to reunite them with their relations.

While receiving the kidnapped victims from the Commissioner of Police, Matawalle commended the commissioner for his dedication and total commitment towards ensuring peace in Zamfara.

He also described the release of the kidnapped persons as a sign that the peace process was succeeding and urged for continued support and prayers from the people of the state.

The governor directed the Government House Clinic to check the medical statuses of the victims and said the state government would organise a ceremony that would bring the Fulani, vigilante members and other people to witness the handing over of the victims to their respective families to further demonstrate that the peace process was working.

NAN gathered that one of the rescued victims, Haruna Na-Hantsi is a national of the neighbouring state of Maradi in Niger Republic.

Another victim, Ibrahim Mohammed Moriki, a Community Health Worker attached to Kuturu Primary Healthcare Center said he was kidnapped by bandits over 20 days ago while some of those rescued along with him had spent more than two months in the hands of the bandits before he joined them.

He informed the governor that they were released from a village called Kagara in Isa Local Government Area of Sokoto State before they were brought to the Gusau Government House.