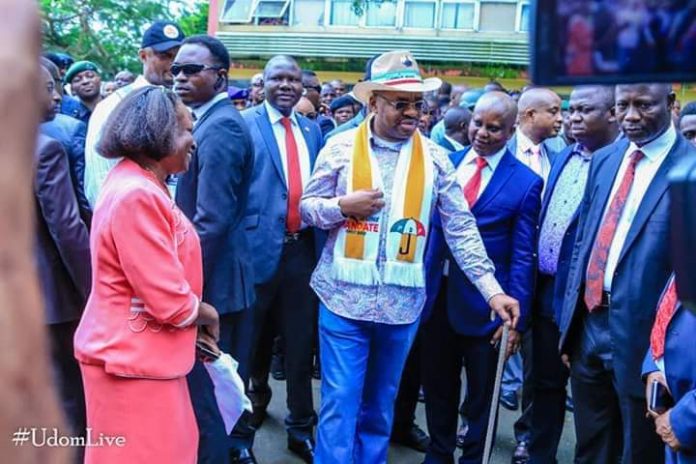 The Akwa Ibom State Governor Mr. Udom Emmanuel has sympathized with flood victims in the state and ordered Ministry of Works, other relevant agencies to put remedial measures to reduce flooding in affected areas of the state.

Governor Emmanuel gave the directive while embarking on the spot assessment of flood affected areas in Uyo, the state capital.

Accompanied by the Secretary to government, Dr Emmanuel Ekuwem, Head of Civil Service, Elder Effiong Essien among other aides of his administration, was conducted to the flood affected areas by the immediate past Commissioner for Works Mr Ephraim InyInyang-eyen.

The Governor explained that Uyo topography is prone to flood while blaming some of the incidents on indiscriminate disposal of refuse in drainages and obstruction of water channels through illegal buildings.

Mr. Emmanuel with his team visited Nkemba Street by Abak Road and discovered the drainage was blocked by accumulated debris and wastes.

Governor Emmanuel also made a brief stop over at the Ring Road 111,Construction site handled by Hensek Integrated Engineering Services where the MD of the company Engr.Uwem Okoko explained the extent of work done by his company.