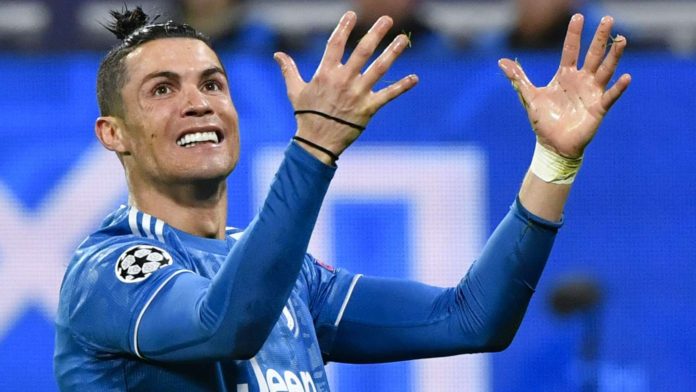 Cristiano Ronaldo was helpless to prevent Juventus slipping to a first-leg defeat against Lyon at the Groupama Stadium.

Lucas Tousart scored the only goal as Lyon secured a slender 1-0 win over Juventus in the first leg of their Champions League last-16 clash.

Maurizio Sarri’s side were desperately poor in the opening stages and deservedly fell behind in the 31st minute when Tousart found the net for the first time in the Champions League this season.

Cristiano Ronaldo was unsurprisingly Juve’s biggest threat throughout, the Portuguese superstar clipping narrowly wide in the opening period, while Paulo Dybala had a goal ruled out for offside three minutes from time.

Yet under-fire Lyon boss Rudi Garcia will be delighted with how his side protected their lead and knows they will need to put in a similarly robust defensive display in Turin if they are to progress to the quarter-finals.

There was no such reprieve for Juve 10 minutes later, however, when Aouar beat Danilo down the left and picked out Tousart, who steered his volley into Wojciech Szczesny’s top-right corner from six yards out.

The goal woke the visitors from their slumber, with Ronaldo whipping in an attempt that narrowly missed the target.

Toko Ekambi came agonisingly close to doubling the hosts’ advantage shortly before the interval, blazing over from close range after Miralem Pjanic had lost possession.

Dybala fizzed wide from a promising position 20 minutes from time as Juve cranked up the pressure in search of an equaliser.

Ronaldo saw appeals for a penalty waved away in the closing stages, while a Dybala strike was correctly chalked off, as Lyon stood firm to deny their opponents a potentially vital away goal.