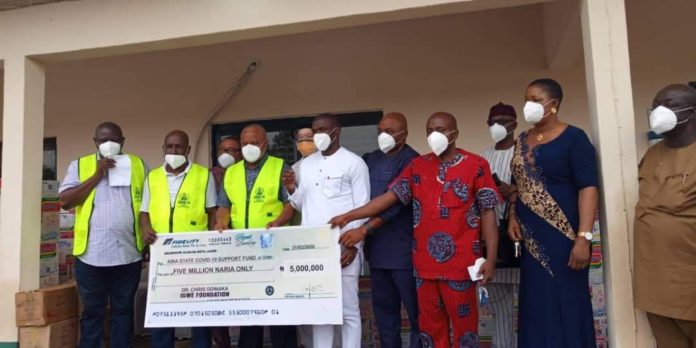 The Chris Odinaka Igwe foundation (Chrisnak), has responded to the call of the Abia state government on wealthy individuals, organizations and philanthropists to assist the state in the fight against the Coronavirus pandemic through their donations.

Chrisnak through its founder, Prince Chris Odinaka Igwe donated N5m cash, 2000 cartons of Indomie Noddles for distribution to the indigent people in the state.

Presenting the items on behalf of the founder, the member representing Umunneochi State Constituency in the Abia state House of Assembly, Barr. Philip Okey Igwe, said the support was to bridge the gap arising from the ill preparedness to fight the virus in the state.

He stated that the organization will soon start the production of facemasks, hand sanitizers, among others, in their industrial project in Owaza, Ukwa West local government.

Barr Igwe said that the essence was to help the people live and imbibe a healthier lifestyle and increase the state revenue.

He further announced that there will be a collaboration with local government authorities in Abia North senatorial zone in the state to work out mechanism to educate and sensitise the people on Covid 19 in line with WHO and NCDC sanctioned health protocols.

He added that there would be meeting with state committee on Covid 19 to know their challenges and area of assistance.

The lawmaker assured of commitment in investing in youth empowerment and employment as it remains the ultimate panacea against social insecurity.

Receiving the items, the State Chairman of the Inter Ministerial Committee on Covid 19 and Secretary to the state government, Barr Chris Ezem thanked the foundation for the donations and assured them that their name would be included among donors earlier announced by the governor.

He assured that the item would be judiciously utilized and appealed to the people to bear with the government on pains associated with the lockdown.

He expressed the hope that the state would not record any case of Covid-19 virus. 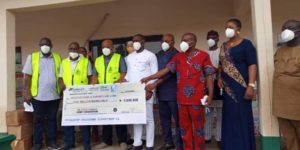 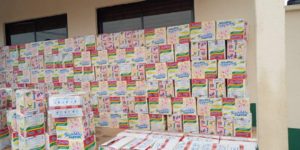