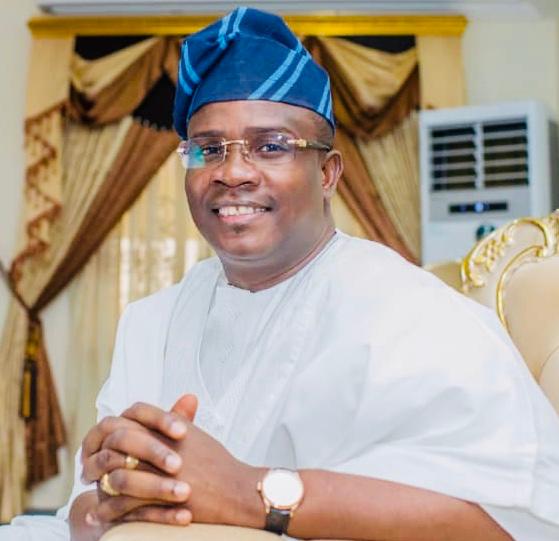 Ajanaku made the commendation in Ibadan on Sunday, at the programme purposely organised by his Foundation to distribute some relief and palliative materials to the people of the state, to replicate his largesse to the vulnerable in Lagos state, analysed the roles played by the state chapter of NUJ in putting everyone on his/her toes to halt the spread of the pandemic.

“The issue of Covid-19 pandemic would have resulted in catastrophe in Oyo State but for the timely intervention of the Oyo State Council of the Nigeria Union of Journalists (NUJ) who unassuming high sense of responsibility by hitting hard all authorities who ought to have taken proactive approach to stop the spread of the virus in the state.

“Oyo NUJ has been so wonderful and very uncompromising in putting us all on our toes in the state. Their decision to risk their relationship with personalities and government to safe the residents of the state came at the same time when others are busy scampering to capitalise on the pandemic to make millions into their personal account. Oyo NUJ is busy standing against all odds to safe lives in the state.”

“If not for the promptness of the state NUJ, the pandemic would have by now dealt with us in an overwhelming manner that would have affected hundreds of people. The Union deserved to be applauded for taken the bull by the horns; it woke us all up in the state, including the medical association, UCH and even Oyo State Government.

He said that such selfless and essential service rendered by the union needed to be reciprocated.

“It is after the state council of NUJ has distinguished itself has a body offering selfless service to the public and humanity in general that some of us considered it necessary to rally the Union support to cussion the effects of Covid-19 on its members’ individual economy through donation of goods and money.

“It is time for us to appreciate the state journalists for their uprightness and standing for masses in their time of needs. How I wish other unions, associations and group could follow this selfless examples,” he advised

Ajanaku also described the contributions of Comrade Titilola-Sodo as another great efforts towards ensuring that all the people living in the rural, suburb and interior areas in the state comply with the directives of the state government in halting the spread of the Covid-19 pandemic.

“I was also impressed when the information about the contributions of the Chairman, Nigeria Labour Congress, Oyo State Chapter, Comrade Bayo Titilola-Sodo and his team got to me.

“According to information at my disposal, I learnt the NLC Boss is the Chairman of the Advisory Council of the Coalition of Grassroots Volunteers Against Covid-19 (COGVAC-19), a project established by the Association of Local Government Information Officers (ALGIO) to reach out to those in the rural, suburb and interior areas. 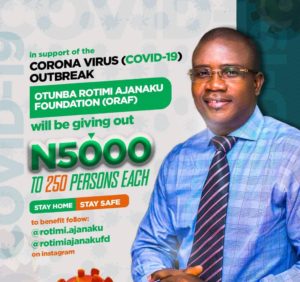 “I see the establishment of COGVAC-19 Team by Comrade Titilola-Sodo’s group as another great and commendable step. This is the only group that has the ability to take the campaign to every corner of the state,” Ajanaku stated.

“With this singular act, Comrade Titilola-Sodo has distinguished himself as an exemplary leader of a great value who sees service to humanity as a call, that must be answered,” Ajanaku praised the NLC Boss

“With the establishment of volunteers at local government level, reaching out to people in the rural, suburb and interior areas would not be a problem any longer,” Ajanaku concluded.

Ajanaku who has been feeding over 500 people daily since the outbreak of Covid-19 in Lagos State, launched a social media platform where 250 persons benefitted N5,000 each. The APC Chieftain had also distributed N5,000 each to 150 people in his Ibadan South West/North West Federal Constituency.

In addition to his contributions stated earlier, Ajanaku extended the relief packages which included cash and foodstuffs to religious as well as professional groups.

APC Federal Government Is Under Obligation To Construct The Bonny-Bodo Road...