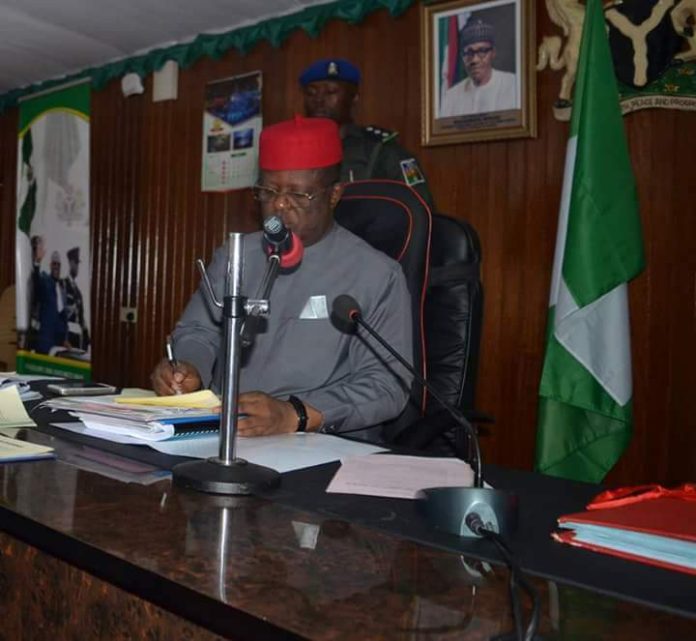 On Friday Ebonyi State Governor, David Umahi has granted an unconditional pardon to 33 convicts in his drive to decongest correctional centres in the state because of the coronavirus pandemic.

The state Attorney-General and Commissioner for Justice, Mr Cletus Ofoke, disclosed this while interacting with newsmen, noting that the convicts were drawn from the Abakaliki and Afikpo custodial centres.

Mr Cletus Ofoke said that the governor was guided in the decision by his belief in God’s mercies and the recommendations of the state advisory council on prerogative of mercy.

“The 33 convicts were serving various jail terms at the custodial centres and the pardon is in line with Federal Government (FG) policy on correctional centres decongestion.

“The governor is determined to ensure that the disease does not enter the state as the world is grappling with the effects of the pandemic.

“He also believes that the idea of social distancing being preached in all the parts of the state might not be absolutely maintained in the custodial centres because of the way the inmates are kept,” he said.

Mr Cletus Ofoke, the attorney-general said that the governor urged relatives and communities of the pardon persons to accept and wholly re-integrate them into their fold.

“We thank the governor for this gesture as this shows that he is truly an apostle of God.

“I also thank the state advisory council on the prerogative of mercy which I head, for considering the merits of several applications submitted by various bodies for pardon of correctional centre inmates in the state,” he said.

Mrs Adaobi Oputa, Controller of Corrections, Ebonyi Command, while carrying out the governor’s directive at the Abakaliki custodial centre, thanked the governor for the gesture.

“The offences of the pardoned inmates include: stealing, burglary and minor assault among others as 20 of them are from Abakaliki and 13 from Afikpo custodial centres.

“These pardoned persons are from various local government areas of the state and the governor instructed that they sign affidavits to be of good conduct which we will deposit in court,” she said.

Oputa expressed optimism that the pardoned persons would benefit from the palliative measures earmarked by the government for citizens to cushion the effects of the COVID-19 lockdown.

“Most of them will have nothing to do presently and they will be grateful to the government if they are included in the palliatives’ beneficiaries to start a new life.

“We are going to send them to their communities with our little token and this pardon means that they are no longer ex-convicts.

“Anyone who treats them as ex-convicts can be sued in court because the pardon is a form of amnesty which implies that they never committed the offences,” she said.

Mr Peter Chinonso one of the pardon persons, thanked God and the governor for the gesture, noting that he passed his West African Examination Council (WAEC) from the Abakaliki custodial centre.

“I was convicted in 2017 for stealing when I was in Senior Secondary School (SS2) class and I will strive to continue with my education in order to become a lawyer,” he said.