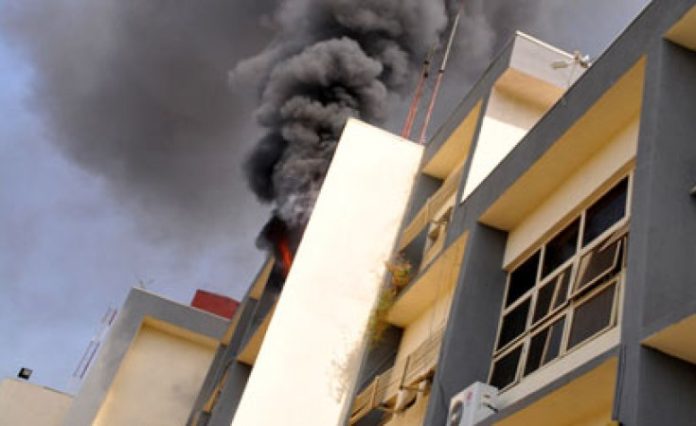 But for the intervention of the Federal Capital Territory (FCT) Fire Service, the headquarters of the Independent National Electoral Commission (INEC) would have been reduced to rumbles by the fire incident that gutted the secretariat of the electoral body on Friday morning.

The fire which started in the early hours of the Friday, completely razed the commission’s newly-furnished media centre before it was curtailed by the FCT firemen.

Commenting on the incident, National Commissioner and Chairman, Information and Voter Education Committee, Festus Okoye, blamed it on electrical appliances, assuring that there was no cause for alarm.

“Some of our critical staff are in the office and noticed that fire had started from the office of the Director of Election and Party Monitoring.

“They rushed off and alerted the fire service but our own internal firemen had responded before the arrival of the Federal Fire Service and they were able to put off the fire.

“It started around 11am or 11.30am and you could see that it did not get to the main building of the headquarters.

Speaking to newsmen at the scene of the incident, Controller Raima Maomon, in charge of Abuja Command of the service said that the commission invited them in the morning for an assistant.

“Before we got here, our men that are on ground had started fighting the fire and we joined to quickly bring the situation under control. We had deployed six fire trucks as well as an ambulance but good enough no casualty was recorded.

“I can tell you that the level of damage is so minimal and small. However, by the time you take it at the roof level, you will be thinking that the situation is so grievous, but it was because of the PVC used for the ceiling.

I can confirm to you that the level of damage is so small. The firemen were able to respond on time here to ensure that they save the situation otherwise the whole of the complex would have been razed down.” Investigation into the cause of the incident is still on,” he said.