Home FEATURED Our Vision Intact,Journey On Course – Ikpeazu tell Abias on the Five... 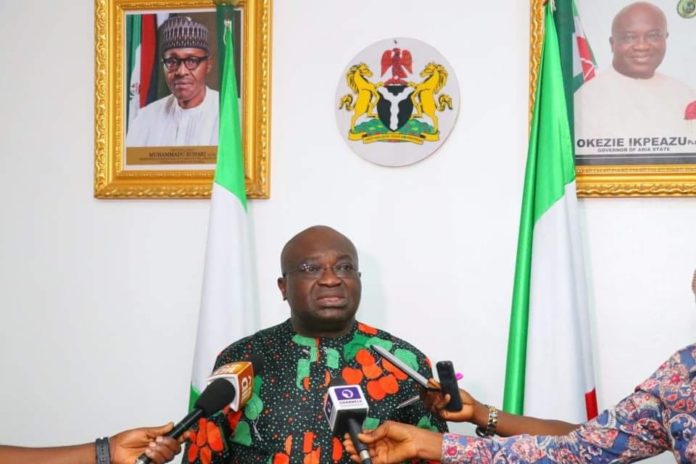 The Governor thanked God Almighty for His grace upon our people and our State, assuring that his vision for a stronger Abia remains intact.

Governor Ikpeazu notes with gratitude, the support he has received from the people of the State in his quest to make Abia a stronger state and renewed his total commitment to the Abia dream.

According to the Governor, “as we mark the first anniversary of our second term in office and our fifth year in the service of our state, I make bold to state that even in the face of daunting challenges, we have made tremendous progress in practically every facet of governance and evidence abound that we shall finish very strong in our quest to stabilize governance in our state”.

The Governor noted further that since the beginning of his second term, efforts have been made to deal with the challenges of infrastructure, especially in the capital city of Umuahia and Aba, our main commercial city.

“In Umuahia” , the Governor continued, “we have completed the reconstruction of the first phase of Aba Road which is a major entry point into the state capital and the finished work is a beauty to behold, a solid dual carriage way that proudly welcomes you into our capital city, handled by a first grade and internationally recognized construction company, Arab Contractors. Work has also started on the second phase.
Currently, we are embarking on the reasphalting of major roads in Umuahia town”.

” The plan” , according to the Governor, “is to have one solid stretch of road from Ubakala Junction through Isi Court, Aba Road, Isi Gate, Umuwaya Road all the way to the Uwalaka Road Junction at Gariki. This stretch, upon completion, will have functional solar powered street lights operating through the night to ensure smooth vehicular traffic and give our capital the desired aesthetic look”.

For the very first time since the creation of Abia State, our state owned Broadcasting Corporation, the BCA has been hooked to the National Grid. We have successfully completed an Injection Substation designed to provide power to the corporation and save money hitherto spent on diesel. This substation will also assist us power the street lights around the adjoining Ogurube layout in Umuahia.

“In Aba, our efforts at rebuilding broken infrastructure remains on course.
We have rebuilt the first phase of Eziukwu Road, making it possible for our people to connect Eziukwu Road to Okigwe Road, something that has been impossible for several years. Work is ongoing at the adjoining Ojike and Milverton Roads, and they shall be ready in a short while. It is important to note that the Eziukwu Road project is designed to run all the way to Cemetery Road through the Market there. Our plan is to ensure that the entire stretch of Eziukwu Road is rebuilt to first class standard.
Work on Osusu Road has reached advanced stages and we make a commitment to complete it.
I am also happy to announce to you that few days ago, we completed the first stage of the work on the Obikabia – Obikabia Road Project. Today, it is possible to drive smoothly from Obikabia Junction in Obingwa LGA all way down to Umuene Junction in Isiala Ngwa South LGA. This completed segment is over 30km and makes it easy to connect to the Enugu PH highway around Umuikaa Junction straight from the Ogbor Hill area. This road has opened up several rural and farming communities. The second phase of the project which will connect Umuene to Umuikaa Junction and Umuene to Obikabia or the Isiala Ngwa Junction will commence shortly.
The Contractor that will handle the Okpu Umuobo- Mgboko Road has been mobilized with funds and he is expected to mobilize to site shortly.
Our flyover project, the Osisioma Interchange is fully on course and will be completed and commissioned this year for the use of our people”.

The Governor noted that work is ongoing on several other roads in Aba like Opobo Road, Immaculate Road, Aba Owerri Road, the Osisioma – NNPC Depot – Ekeakpara Road, most of which have major drainage components. This is in addition to several other road projects. Efforts have been intensified towards the maintenance of existing roads through the Zero Pothole Initiative.
He further reassured the residents of Aba that the 27.4 Billion Naira project for the reconstruction of Ngwa Road, Uratta Road, Port Harcourt Road, Obohia and Ohanku Roads will completely and permanently change the infrastructural landscape of the city for the better and asked for their cooperation with the contractors when they start the work in a few days.

On Trade and Investment, Governor Ikpeazu noted that Abia remains the destination of choice with Aba leading the way proudly. He paid special tribute to the Aba Business Community for their resilience and determination to keep our state on the map of economic development through private enterprise, especially at this difficult period of the COVID-19 pandemic.

Governor Ikpeazu thanked the people of the State for their patience and understanding as the government was faced with the difficult decision to lockdown the State and enforce several other measures designed to protect our people at a time like this. He urged our people to continue to take their health very seriously and obey those protocols designed to ensure our collective safety. He further assured Abians that his administration has put in place enough measures to manage any cases of the disease in the State.

In a bid to prepare our state for the challenges of economic management post the COVID-19 era, the Governor empaneled a Committee of Eminent Abians with proven pedigrees in economic and financial management to advise his administration on steps to be taken in the pursuit of a stronger economy. That Committee has started their work and Government renews its commitment to the full implementation of their recommendations.

On Education, Governor Ikpeazu is proud to note that even in the face of closed schools nationwide on account of COVID-19, Abia School Children are not allowed to waste their time at home doing nothing. The RADIO CLASSROOM initiative of his administration has kept our children busy on a daily basis ensuring that knowledge gaps occasioned by the closure of schools are bridged to a reasonable extent and gave an assurance that the program will continue to run until schools will resume.

He stated that his administration had, before the outbreak of the Pandemic, already commenced the construction of some small agro allied industries in some local governments as a pilot project with plans to extend the program to each of the 17 local government areas of the State.
According to the Governor, four local governments, namely Umuahia North, Isiala Ngwa North, Obingwa and Ugwunagbo already have their structures ready while definite orders had been made for equipment. The structures for Bende and Ohafia LGAs are almost completed. This is a clear evidence of our commitment to drive our agricultural revolution through the establishment of agro allied concerns that will provide direct and indirect jobs to our people.

Governor Ikpeazu also saluted the Abia workforce for their hard work and resilience, with an assurance that the current situation where salaries and pensions have been reasonably stabilized will be sustained, but cautioned that the downturn in the economy occasioned by the effects of COVID-19 pandemic could create fresh challenges of cash flow for the government. He however gave an assurance his administration will work hard to meet up with all obligations to the workers.

Governor Okezie Ikpeazu assured the people of Abia State that he remains determined to continue to govern the State with the highest standards of patriotism and asked for the continued support of the people of the State.

He finally called on our people to pray for the respose of the departed soul of the Honorable Commissioner for Environment, the Late Dr. Solomon Ogunji.

21-years-old Nigerian returnee open up, “How I was trafficked to Mali...