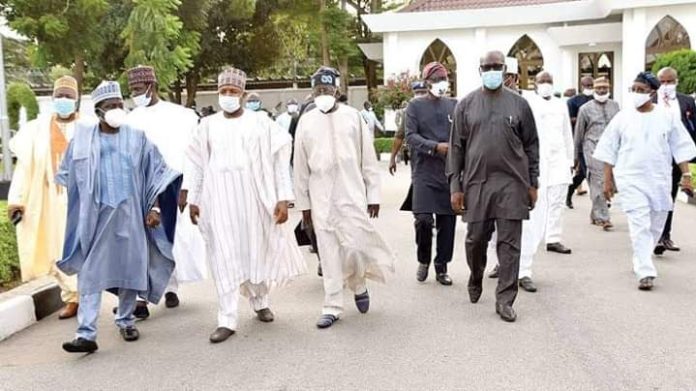 The National leader of the All Progressive Congress, APC, Chief Bola Ahmed Tinubu has debunked the rumour making the round in the media that he has a preferred candidate in the Edo state gubernatorial primary election coming up on June 22nd.

He made this disclosure when some governors of the APC including Obaseki paid him a visit in his country home in Lagos in view of the controversy that he has zero in on a particular candidate but stressed that he is for all the candidates seeking the mandate of Edo people.

He allay the fears that from what he has heard about the governor from party members, he is doing very well in the state. He said he has not disappointed the party when it comes to development of infrastructures, saying that he is also aware that some members are aggrieved which he believes is a normal thing among congregation of individuals.

Chief Tinubu also appeal to followers of the party most especially in Edo to remain calm stating that the notion that he is aligning with anybody to remove the governor is unfounded and should not be taken serious.

He said he the governor was part of his team and he holds him in high esteem. He disclosed that he doesn’t have issues with the mode of primary the party wants to adopt, noting that in Lagos state, they suggested the mode of primary they want to adopt to the National Working Committee, NWC, and it was adopted. He assured that he will speak with the national Chairman of the party, Adams Aliu Oshiomhole so that they can find a common ground in resolving the issues.

It is to be noted that the national leader also admmitted personally that he doesn’t have anything against the re-election of the current governor, Mr. Godwin Obaseki, adding that he only feel as a leader that everyone should be seen been carried along in the race.

He said the governor has done well as a person because they have known each other for such a long time hence the need for every opportunity to be exploited so as not to create any friction among the party faithfuls.

He however expressed his appreciation to the governors for coming to see him. He thanked them profusely saying they have demonstrated tact and commitment in ensuring that the issues are resolved as lobbying and exchange of views remain a major feature of democracy anywhere.

Meanwhile, the chairperson of the APC Progressive Forum, Senator Abubakar Atiku Bagudu of Kebbi state who led the team on the visit in his remarks appreciate the national leader for his intervention and also inform him of their continuation for consultation with critical stakeholders of the state believing that solutions that will be favourable to all the party will be found.

Abia, PIND to Partner on Long Term Development of State