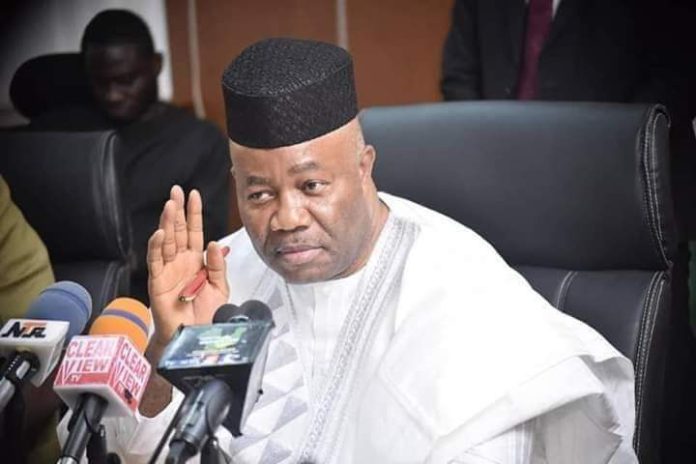 Spread the post
As the battle between Minister of Niger Delta Affairs, Godswill Akpabio, and the Senate Committee Chairman on Niger Delta Affairs, Senator Peter Nwaoboshi continue to trade tackles over the controversial projects in the Niger Delta Development Commission, Akpabio said claims that he sought for NDDC projects to be cited in his constituency were false.

Godswill Akpabio was a former Senate Minority Leader in the eight Senate before being made Minister of the Niger Delta Affairs.

Reacting to allegations against him by the Senate Committee Chairman on Niger Delta Development Commission, Godswill Akpabio insisted that he never wrote personal letters seeking intervention projects in his constituency to be included in the budget when he was the Minority Leader.

It will be recall that Nwaoboshi, at a press briefing last week in Abuja, displayed some letters purportedly written to him by Akpabio when he was the Senate Minority Leader, “seeking that projects should be included in the budget of the NDDC.”

But Anietie Ekong, the Chief Press Secretary to the Minister, in his reaction to journalists on Tuesday dismissed the allegations, explaining that the letters in question were addressed to the leadership of the Senate, contrary to Nwaoboshi’s claims.

“Nwaoboshi’s claims against my boss that he sought for N500 million intervention projects were false and should not be taken seriously by the public.”

He further clarified that the letters were addressed to the leadership of the National Assembly at the time and were referred to Nwaoboshi for recommendations.

Instead, he urged Nwaoboshi to respond to some of the grievous allegations made against him by the Interim Management Committee (IMC) of NDDC, that he wrecked the Commission’s budget for his personal benefits.

“We understand that people are getting hysterical because of the ongoing forensic audit because of what had happened in the past. Making spurious allegations against Senator Akpabio cannot stop the probe.

“Rather than seek for straws to cling on, Senator Nwaoboshi should address the grievous allegations of the NDDC that he mindlessly wrecked the NDDC budget for his personal benefits, a practice that has been perpetrated over the years and throwing the Commission into near insolvency which the present management is trying to clean up.

“With the present Interim Management Committee led by Prof Kemebradikumo Pondei and the NDDC under the supervision of Senator Godswill Akpabio as Minister of Niger Delta Affairs, it can no longer be business as usual as the wanton rape of the Niger Delta region must stop.”