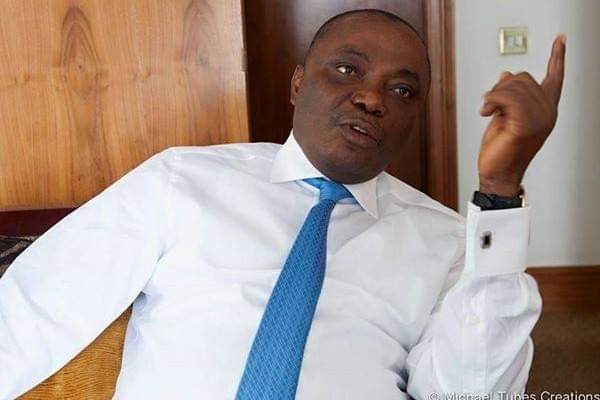 It was Mark Twain that was quoted to have said that “A lie can travel around the world and back again, while the truth is lacing up its boots.” This best describes the speed of light with which the lies peddled against the Minister for Niger Delta Affairs, Sen. Godswill Akpabio, by no less a person than the Senate Committee Chairman on Niger Delta Development Commission (NDDC), Senator Peter Nwaoboshi, representing Delta North for a second time.

It is no longer news that the insistence of the Minister that the Forensic Audit instituted by President Muhammadu Buhari on NDDC must see the light of day has upset many interests in the Niger Delta, Chief amongst them being the various National Assembly Committees on Niger Delta. Every spanner has virtually been thrown into the works, to ensure that the audit is crushed. The desperation on the part of those alleged to have held the region hostage has reached an unimaginable crescendo as they daily churn out spurious lies, half truths, twists and turns through various media channels.

Recently, the Senate Committee Chairman on NDDC, Peter Nwaoboshi, peddled a heinous falsehood against Sen. Akpabio about a certain N300m naira fencing contract for a Polytechnic in Akwa Ibom State. It is important to begin by saying that every other allegation, founded or unfounded, against the Minister of Niger Delta Affairs, Sen. Akpabio and the Interim Management Committee (IMC) of the NDDC, at this time, is part of the attempt to distract them from the Forensic audit which they are supervising. This fact does not, in any way, deify these personalities. No! They are humans, with their weaknesses. But they are so bent on sanitizing the NDDC, at this time, that they need our support to see through the forensic audit.
Nwaoboshi lied without recourse to the oath he swore as a Senator of the Federal Republic of Nigeria, to uphold the Constitution, while brandishing documents that have no substance in his allegations. It is surprising that a man who has found himself through the corridors of power for several years now is not done with such mannerisms as to deceive the public over what is a Zonal Intervention Project meant for Akpabio as Senate Minority Leader which has nothing to do with the NDDC budget as the Presidency, every year, makes provisions for the two Houses of the National Assembly.

That said, Sen. Akpabio has in response to the allegation of N300m contract, denied ever being an NDDC contractor, and insists that Zonal intervention projects of the Senate minority leader is different from NDDC budgeted projects. In real terms, zonal intervention projects of NASS are NOT done with NDDC budget. Project intervention which has a threshold for each Senator and each House of Representative member is a Federally approved Program of the NASS, annually.

Such is his unparalleled desperation that he has succeeded in corrupting the Clerk of the Senate and inducing him into an inglorious path in exchange for an extension of his Service year, a move that has generated knocks against the NASS.

In fact, for a Clerk of the Senate begging for extension with retirement at his door step to release such zonal intervention letters to Peter Nwaoboshi for a press conference, with a view to deceiving the public, says a lot about how far desperate people can go to sink a good cause. Sen Nwaoboshi lied, in this case, as those contracts referred thereto were Senate Zonal intervention jobs and none has been paid for nor performed, since 2017! It is important for Nwaoboshi to also come forward with proof of payment for the purported job and effectively link the contractors to Sen. Akpabio.

The supposed fencing project began and ended on that piece of paper being bandied by Nwaoboshi, unless he has added it to the 1,000 contracts awarded to his front man, Nelson Agbamuche. Otherwise, the embattled Senator should bring proof of the contract award with the name of the company to which it was awarded. Nigerians are not gullible to believe the lying Senator who has failed to show evidence of payment made to any company belonging to Akpabio or his crony. Again, is there any proof that the job has been executed?

It has become clear that many Senators were deceived to suggest projects to be executed in their constituencies, and even though they were appropriated but were never executed. Why is Nwaoboshi desperate to cover the lies even before the Auditors are through? If payments were made for such jobs as he claims, is it not proper to allow the Forensic Audit expose the real beneficiaries?

Is he afraid that other lawmakers will discover his grand deception over the years where he has used his position as Senate Committee Chairman to amass voluminous, phantom contracts to himself through his proxy? Should only one Senator be running amok on National Television over a Presidential order for a Forensic Audit?

Akpabio is the Minister of Niger Delta Affairs and requests for patience because in no distant time the Forensic Audit will expose those complicit in the failure of the NDDC and all who joined to impoverish the Niger Delta region. In any case what has N300m fence job got to do with N3 trillion naira fraud? Or is Senator Nwaoboshi trying to justify his 1000 NDDC contracts, as alleged by the Executive Director -Projects (EDP), NDDC, Dr Cairo Ojougboh, against him and his cohorts, Nelson Agbamuche and co? Mr. Agbamuche says the hundreds of jobs he controls do not belong to Peter Nwaoboshi who purportedly acted and continues to act on behalf of members of NASS, but what is left is for Mr. Agbamuche to prove how he won all the jobs and why he merits such quantum of jobs per year.

It is a view held in some quarters that the self-styled oracle of Delta state Politics and Senator Representing Delta North Senatorial District mistakes the Delta in Niger DELTA Development Commission (NDDC) to the effect that the commission is a property of Delta State where his brazen rascality is dreaded by those who deify him.

Thus he believes he can turn NDDC into his own ATM with which he churns out emergency projects, even in time of no emergency. Nothing else explains how NDDC under his oversight supervision is committed to over 2 trillion naira concerns which has crippled the agency.

The NDDC, therefore has no regional project to its name. Only emergency repairs and aimless trainings, running into billions of naira as well as his annual contract for the supply of plastic chairs to schools.

This contract which gulps over 3 billion naira annually is usually executed in his personal warehouse in Asaba and never reaches the selected schools, yet, NDDC pays in full for it. These and many more are part of sleaze already exposed by the forensic audit for which they can do anything to make sure it is never completed.

As a matter fact, Sen. Nwaoboshi who has pending cases with the Economic and Financial Crimes Commission (EFCC) involving over 22 illegal bank accounts is also the same man who purchased The Guinea House, belonging to Delta State Government, a deal that has become subject of public outcry. This is not a man who should adorn a saintly garb and pretend to care about anything except that which enriches him.

Part of the inability of the NDDC to meet their mandate to the people is the penchant of Sen. Nwaoboshi and his counterpart in the House of Reps to sit on the NDDC budget for months into the fiscal year, until they extract some huge financial commitments from the management of the NDDC or phantom projects are padded into the budget, even if it means, as in most cases, supplanting meaningful projects in the region.

This calls to question the source of the powers of a committee Chairman to adjust timeline for budget defense and presentation, as Sen. Nwaoboshi has been doing.

Just recently, the duo of Nwaoboshi and his House of Representatives counterpart without recourse to plenary, extended the deadline for the submission of the NDDC Budget for 2019, submitted it 5 weeks to its expiration, in order to ensure that it is not implemented for the selfish reason of forcing the IMC to pay for old contracts awarded by the previous Boards.

The Budget failure is simply because only two people sit in the comfort of their hotels to assign details of the Budget, thereby allocating huge sums to Training, Medical Retreat and other non physical and meaningful projects.

It might also suffice here to say that whatever financial misappropriation levelled against Akpabio or anyone else, in the context of the NDDC can best be exposed by the forensic audit. So why not let it thrive?

It is obvious that Nwaoboshi has so much to cover up as he is running against time. Could it be that he was elected as Senator for NDDC since he has in the past few weeks devoted so much time and resources to frustrate the Forensic Audit by throwing ceaseless mud at the supervising Minister and members of the Interim Management Committee?

Senator Nwaoboshi’s unlimited lies only confirm that he has been the unseen hand that has run the NDDC aground and has kept the Niger Delta region in chains under the Change Government.

Will the leadership of the National Assembly look the other way while a senator cause such grave injustice to a people, so rich yet so helpless? Time will surely reveal the truth.