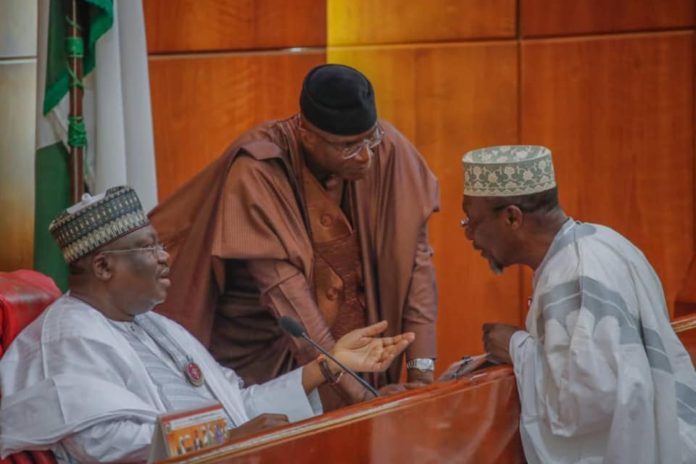 “It is more disheartening when you now see that, against the term of reference by the President of the country, which is to probe the NDDC managements from the past, these lawmakers, with sinister motives and agenda, are bent on investigating the Interim Management Committee that the President is using to run skeletal services at the agency, while his Forensic Audit lasts.”

Last month, May 2020, a letter written and transmitted to the Economic and Financial Crimes Commission (EFCC) from the Office of the Clerk of the Nigerian Senate, was initiated by the Deputy Senate President’s office, seeking the anti-corruption agency’s support in what it called “it’s ongoing inquiry into the affairs of core members of the Interim Management Committee of the Niger Delta Development Commission (NDDC).”

According to the “Senate”, “An Ad-hoc committee has been set up to investigate allegations of fraud and money laundering brought against the Honourable Minister of Niger Delta Affairs, members of the Interim Management of Niger Delta Development (NDDC) and certain contractors. 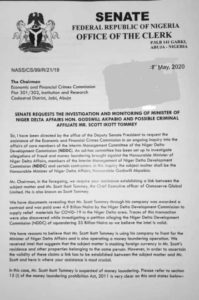 In this inquiry, the subject matter shall be the Honourable Minister of Niger Delta Affairs, Honourable Godswill Akpabio.” it went on.

By this letter obtained through a reliable source, the Office of the Clerk of the Senate is believed to have confirmed the hitherto doubted involvement of certain members of the National Assembly in the witch-hunt of the IMC because of their own level of involvement in the corruption at the NDDC, predating the IMC.

To this end, watchers of events in the sector say vested interests, within the Senate, have chosen to act rather clever by half in covering up for their past and recent sleazy deals in the NDDC resulting in some of the most outrageous heist of common wealth in Nigeria.

Many Nigerians have been fed with all negative news about Senator Godswill Obot Akpabio, the Interim Management Committee (IMC) headed by Professor Pondei and Dr. Cairo Ojougboh, the Executive Director Projects among others at the NDDC.

These were the information that sipped into the media space until the FACTS began popping up when the targets of the media smear campaign started revealing the facts. Yes, verifiable and documented facts.

The truth, according to IMC, is that there are some members of the past and current National Assembly who had hijacked the NDDC, a federal government agency, set up with good intentions to better the lives and banish poverty from the people of Niger Delta.

The objectives of setting up the NDDC failed flat on its face, as it became a conduit pipe for funding their personal economic, social and political projects.

Dr. Cairo Ojougboh specifically laid bare one of the syndicates when he spoke on Arise TV about how this cabal in the past, paid ₦50 billion in one day, not one month, to some non-Governmental Organisations (NGOs) for no justifiable reasons. Dr. Ojougboh had on him, records to show as they are now in the custody of the IMC.

Our investigations revealed that efforts to dominate the media, particularly the social media with misleading information about the real issues in the NDDC, are to cover up for the deep-rooted corruption in NDDC for which reason President Muhammadu Buhari sacked the past management and replaced it with the current Interim Management Committee.

Their role is to hold forth while the Forensic Audit ordered by Mr. President is seen to a conclusion. This Forensic Audit is now unravelling the mystery surrounding the disappearance of trillions of Naira pumped into the commission from inception to the present time.

It’s therefore, shocking, to put it mildly, that Mr. President, desirous of a high quality life for Niger Deltans, set up an IMC and ordered a forensic audit, only for the office of the Deputy Senate President, Senator Ovie Omo-Agege, to instruct the Office of the Clerk of the Senate to write a dubious letter to EFCC, seeking its assistance to DEAL with Akpabio, thereby giving the impression that the letter emanated from the National Assembly instead of the NDDC cabal at the National Assembly.

Why this abuse of privilege? Why this deception? Is it simply for Akpabio doing his job as minister, saying never again will NDDC be run as a private estate of any person?

Any wonder few days ago, Niger Delta leader and elder statesman, Chief Edwin Clark, reinforced the demands for probe of the Cabal at the National Assembly. He took responsibility on behalf of other leaders of the region for their conspiracy of silence while the NDDC, since its creation 20 years ago, has been raped and drained to the detriment of the good and long suffering people of the Niger Delta.

Chief Clark therefore called on the Senate President, Ahmed Lawan, and Speaker of the House of Representatives, Femi Gbajabiamila, to as a matter of urgency commence the investigation of their members in the light of huge revelations and accusations being uncovered, as the IMC charged with that responsibility by President Buhari continues to work.

A public opinion sampled during our investigations expressed sadness that instead of the leadership of the National Assembly to back the President and those he sent to clean up the NDDC and support the independent investigation of the citadel of corruption, it is insisting on being the one to probe the NDDC which is already being probed by the President, in whom is vested the authority by the constitution.

“It is more disheartening when you now see that, against the term of reference by the President of the country, which is to probe the NDDC managements from the past, these lawmakers, with sinister motives and agenda, are bent on investigating the Interim Management Committee that the President is using to run skeletal services at the agency, while his Forensic Audit lasts.

“The NDDC Cabal at the National Assembly, who are interested parties, are insisting on being judges in their own cases, suggesting they KNOW that they have skeletons in their cupboards,” a stakeholder said.

Another source, reacting to the letter written to the EFCC by the Office of the Clerk of the Senate with instruction from the Office of the Deputy Senate President, described the latest move by the National Assembly as disrespectful to the President of Nigeria, Muhammadu Buhari.

“This insult on President Buhari from the NASS should by now be enough. This IMC is just a new body. What the President is investigating is broad but they, at all cost want to cover their evils by restricting the probe to a period of near inactivity when there is even no budget from which the IMC could steal (if they were thieves at all). Again, why the Minister? I think the IMC has a boss,” he said.

Senator Akpabio is an appointee of the President of the Federal Republic of Nigeria. President Buhari listens to Nigerians but he knows a smear campaign when he sees one. This letter, from the Senate, is odious and an effort in futility. It runs counter to the objectives of Mr. President and his dreams for the people of Niger Delta. The cleaning of the NDDC is a task that is close to the heart of President Buhari. It must be done.

Nnamdi Kanu: My claims have been vindicated by APC’s, Atiku is...