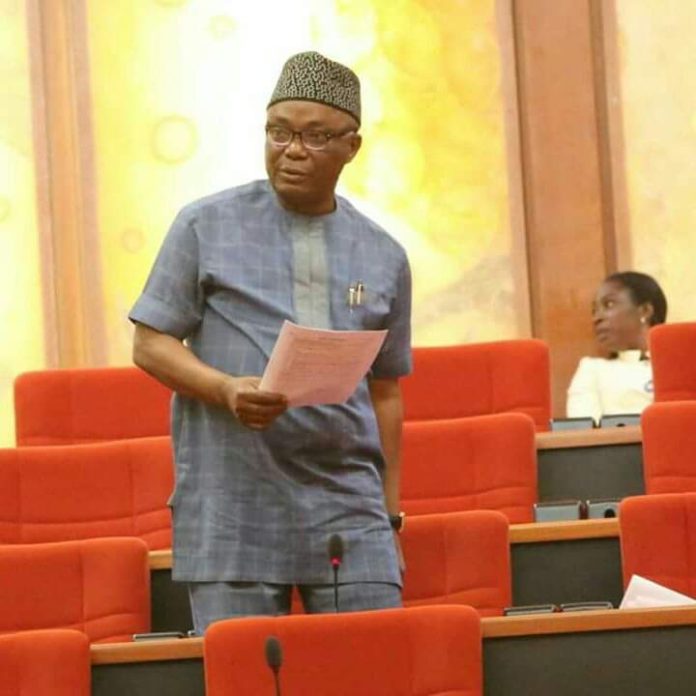 We have noted with dismay Sen. Peter Nwaoboshi’s ignoble act in addressing the allegations thrown at him by deliberately pointing impotent fingers at Minister of Niger Delta Affairs, Sen. Godswill Akpabio.
Sen. Peter Nwaoboshi, in a bid to rewrite reality and make others take the fall for his many acts of dishonesty, told the press that among the contracts inserted in the budget was the fencing of the Federal Polytechnic, Ukana, Akwa Ibom state, for the sum of N200 million and the fencing of the Federal Government College, Ikot Ekpene, at the cost of N100 million while Senator Akpabio carried out those duties on dual purpose as a minority leader in the Senate and as a member of the Senate committee on the Niger Delta Development Commission (NDDC).

Nwaoboshi could only offer multiple attacks and excuses when called out to defend his allegations, for fear of having his web of deceptions and fallibility revealed.
The Chairman of the Senate committee on NDDC, Peter Nwaoboshi (PDP/Delta state) had accused Mr. Akpabio of pushing in millions of projects into the NDDC budget while he was a senator.
Among other projects requested for inclusion in the 2017 NDDC budget by Mr Akpabio included entrepreneurship training for the youths of Akwa Ibom North -West District, on the use of modern farming tools at the cost of N75 million and similar training for the women of the district at the cost of N75 million also.
The release of those letters to validate his claims was an action taken in bad faith since he has failed to release the award letters of the said contracts to prove that such contract was ever awarded to Sen. Akpabio or his companies.
Writing letters and making demands for the inclusion of life touching projects and projects and programmes into the nation’s Budget are legitimate duties of a legislator. Had the contract been awarded and executed, Akpabio would have been vindicated a caring representative of his people

Nwaoboshi’s unethical actions in the past have shown that he has fallen below the required standards of integrity, probity and trustworthiness. He is simply integrity challenged and lacks the moral rights to accuse anyone, rightly or especially, wrongly.
The trust between the lawmaker and the electorates was broken when he under declared his assets and was charged to court.
The Federal Government had filed three counts charges of false declaration of assets against the Delta-North Senator, Peter Nwaoboshi, at the Code of Conduct Tribunal (CCT).
The charges were filed by the Office of the Department of Public Prosecutions, Federal Ministry of Justice.
Nwaoboshi was tried for allegedly making false assets declaration in his Form CCB1 submitted to the Code of Conduct Bureau (CCB) by failing to declare three bank accounts he was said to have been maintaining with Sterling Bank since 2015.
In his bid to mud sling Akpabio, he accused him of writing letters to demand for additional projects for his constituents.
If Sen. Nwaoboshi was not so focused on his pocket alone, he would have known that the Senators are representatives of the people and it behoves on them to recommend projects to be included in the budget. These form the basis for the Constituency projects.
If Sen. Nwaoboshi had any iota of care for the people he represents he will not be trying to play bad politics with an issue as sensitive as Constituency projects.
Sen. Nwaoboshi found himself strap hanging when he tried to rubbish the love and goodwill the Minister had for his people by pushing for developmental projects for the people he represented in the red chambers.
Acting with honour and truthfulness are also basic tenets in a person with integrity. We must emphasize, however, that the number of cases involving lack of integrity and lack of public trust hanging on Nwaoboshi doesn’t pass him off as a man of proven integrity.
In April 2018, Sen Nwaoboshi was arraigned for Money laundering by EFCC in Federal High Court, Lagos which was presided by Justice Mohammed Idris.
He was there after remanded in Ikoyi prisons custody.
Sen. Nwaoboshi has always been in the News for the wrong, reasons like acquiring properties far beyond his legitimate earnings.
In July 2019 Justice Taiwo Taiwo of the Federal High Court in Abuja ordered for the interim forfeiture of 11 properties and 22 Bank accounts linked to the Senator.
The affected properties include Suiming Electrical Company (RC 1090069) located along Asaba Airport Road, Asaba, Delta State; PON Filling Station, along Asaba Airport Road, Asaba, Delta State and a multi-billion naira estate under construction at Maryam Babangida Road, Asaba, Delta State.
They also include Cartage Cinema located at Okpanan Road, beside Rain Oil Petrol Station, Asaba, Delta State; Newbridge Filing Station, along Airport Road, Warri, Delta State; and house at No. 8, Monu Olarewaju Crescent, GRA, Asaba, Delta State.
The rest are, a multi-million building located at 41, Buma Road, Apapa, Lagos; Guinea House, No. 27, Marina Road, Apapa, Lagos; Plot 3011B, Kuranah Close, Maitama, FCT, Abuja, and Ceedeez School Hall Airport Road, Asaba Delta State.
Sen. Nwaoboshi should know that stepping on others in order to rise isn’t a goal and it’s best to live a life of integrity worth emulating than the worthless principle of follow my words, not my footsteps.

APC And The Gale Of Defections By Jerome-Mario Utomi