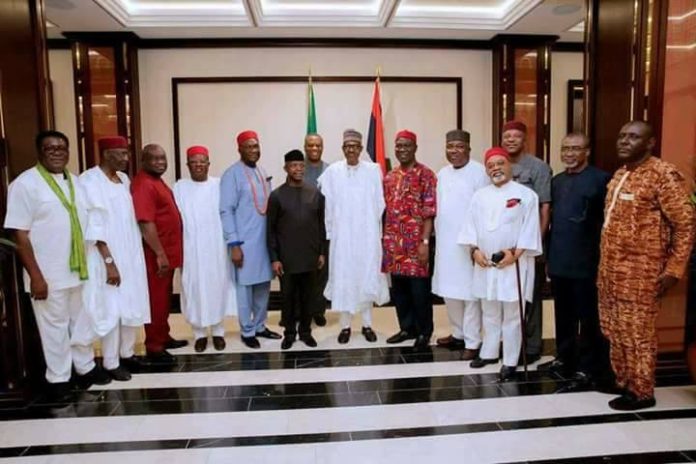 THESE are not the best of times for the governors of the Southeast and South-south states as most of the youths and activists currently accuse them of lacking the courage to protect the regions from alleged ‘terrorists’ invasion.”

But defenders of the governors contend that the alleged terrorists are helpless Almajirai, poor youths, being transported to the zone “over economic realities.”

Findings show that such criticism of the governors of the Southeast and South-south states for alleged mishandling of the influx of herders and almajirai into the zone is not entirely new, especially in the Southeast. It dates back to over two years, but only became more pronounced just before and during the Coronavirus lockdown, especially between March and May, when it was alleged that large groups of children and youths were being transported to the Southeast and other southern zones from the North, in spite of the subsisting presidential lockdown order and ban against interstate movement.

Alleging that the youths being smuggled to the region by yet-to-be-identified forces are members of some terrorist groups, the governors were called upon by activists to stand up and protect the region.

Angry members of some youth groups,  said their worry over the movements “followed the recent threat of Boko Haram elements to overrun the South-south, Southeast and Southwest regions.”

As Monday Nwosu, an activist, puts it: “Our concern today is that our governors here in the Southeast region are not taking this security matter seriously. Instead of emulating governors of the Southwest zone, who stood up in unity and created a workable Amotekun to protect their region, our governors are playing their usual lazy and ‘Eze Onye agwalam’ politics. We are not going to allow them this time around. I can assure you that this security lapse will expose their political indolence.”

Reacting to the development, the Igbo World Assembly (IWA), an umbrella organisation representing the apex National Igbo Organisations in the diaspora, warned not only the Southeast governors, but all the governors of the 17 states in the south to halt what it described as “invasion and plan to overrun southern states.”

The group, in a communiqué it issued after a Skype meeting, called on the states to reactivate their traditional and communal security systems. IWA Chairman, Dr. Nwachukwu Anakwenze, for example, said, “We are requesting all communities in the Southeast and South-South geo-political zones to activate their defense mechanism in order to prevent the invasion of their territories by these suspected terrorists in order to prevent massive genocide.”

Evangelist Elliot Uko, the founder of Igbo Youth Movement (IYM), in his reaction described relocation of Almajiri to the south as “frightening.” He therefore asked: “Why would the almajiris be exported to the east at this time? Why are they hiding them underneath livestock? Why would some northern state governments choose this time, when COVID-19 is suspected to be alive and present in our midst, to redistribute almajiri? Why are they transported discreetly at night?”

Former Secretary-General of NUPENG, Chief Frank Kokori, protesting the mass relocation of youths and ‘suspicious’ elements to the South-south was recently quoted as saying: “Nigeria is a federation and the South-south governors are not doing what they are supposed to do. They boasted they are going to organise themselves just like the Southwest and come up with their own security apparatus like Amotekun. But up till this moment, they have done nothing. They should be ashamed of themselves.”

Also, an Ijaw activist group, Ijaw Peoples Development Initiative (IPDI), said through its National President, Austin Ozobo, that “The movement of terrorists, herders and alleged almajiris to the South-south, Southeast and other southern states has security implications.”

Even before the recent mass relocation of youths to the South during lockdown, governors in the South, especially Southeast governors had been accused of doing very little to resolve save their territories from the hands of violent herders and other alleged terrorists.

One of the governors that have been directly criticized for this offense in the Southeast is Governor David Umahi, the governor of Ebonyi State and the Chairman of Southeast Governors Forum.

As far back as October 2019, before the outbreak of Covid-19 in Nigeria, Umahi and Abia State State Governor, Dr. Okezie Ikpeazu were accused of selling plots of land to Fulani herders for Ruga settlement against the advise and support of other community leaders in the areas.

A youth leader and pro- Biafra activist, Benjamin Onwuka, commenting on the charges, warned the two governors to revoke the sold lands or suffer the wraths of Biafran youths. m to revoke the land and desist from such.”

Responding also, the Organisation of Ebonyi State Indigenes in the Diaspora (OESID), criticised the decision of Gov. Dave Umahi of Ebonyi to establish grazing reserve settlements for herdsmen in the state.

The organisation, in a statement signed by its spokesman, Mr. Pascal Oluchukwu, in Abuja, urged the governor then not to impose herders’ programme on Ebonyi’s ancestral land. All these notwithstanding that Umahi had earlier said through his Chief Press Secretary, Emma Uzor, that there is no plan to establish Ruga settlement in any part of the Southeast and South-south zones of Nigeria.

Confirming Federal Government’s resolve to stop illegal movements, Police Force Public Relations Officer, DCP Frank Mba, said recently: “We have situations where a few recalcitrant persons have tried to break the law. But the good thing is that we have always caught up with them at the end of the day.”

Commenting, a source close to Anambra State Government said “Opponents have turned this issue of mass relocation of Almajirai and other youths to the south as political tool against governors. I can confirm to you that any governor that fails to realise the political significance of this issue will regret it during next elections, especially here in the Southeast.”