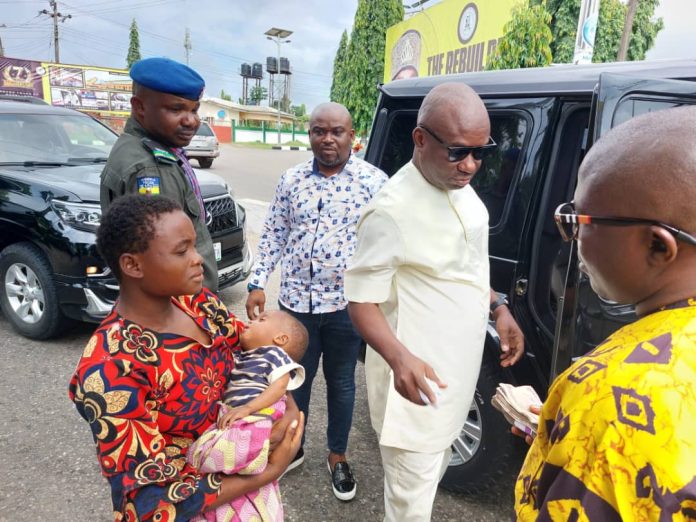 As I sauntered nearly majestically into the 10am Mass last Sunday, I was eager to hear the priest’s perspective on the Gospel reading of the day taken from the Book of Luke 10:25-37. It’s all a familiar parable told by Jesus to a Lawyer who wanted “to put it to Him”. In fact, it is one of the most familiar narratives of the Bible. And I wanted to learn something new from it on that day because the word of God is new every morning no matter how familiar we might have been with it.

So, as the priest finished reading the parable of the Good Samaritan as told by our Lord Jesus Christ, he delved into the sermon by making practical examples of the parable using everyday events around us. Then he asked a rhetoric but probing question: “Can we find the Good Samaritan in ourselves or in our environment today?”

Immediately, Speaker of Abia State House of Assembly, Rt Hon Chinedum Enyinnaya Orji came to mind. And the reason is not far fetched.

On Thursday, 30th June, 2022, a woman who appeared disoriented and with a baby in hand waved frantically at the Speaker’s convoy in a bid to get his attention while he was on a trip out of Umuahia. The Speaker had the option of ignoring her. After all, she was a ‘Jew’ and the Speaker, a ‘Samaritan’. She and her baby had been battered by the vicissitudes of life and were in desperate need of help just like the Jew in Jesus’ story had been battered by robbers and left half dead on the road and in desperate need of help.

Many must have passed by this same woman. But not the Speaker! He took pity on the woman, ordered his convoy to stop and beckoned on her to come over. After interacting with her closely for a few moments, he gave some money to an official who could pass for the innkeeper in our parable and directed he takes the woman and her baby to the Federal Medical Centre, Umuahia, for proper care and that he was going to “make good any extra expense you have” (Lk 10:35) when he returns from his trip.

Also recently, the Speaker had visited Umuagom community in Ugba Afarata Ibeku and saw a transformer donated by his father, Senator T.A. Orji, lying unutilised while the community remained in darkness for months. When he enquired why the situation was like that, Chairman of the community informed him that the community had been making efforts to raise the needed funds for the installation and functioning of the transformer but could not yet do so. The Speaker promptly announced sponsorship of the immediate installation and functioning of the said transformer. Today, months of darkness have turned to light for the people of Umuagom.

Being the Good Samaritan is his nature! The Speaker does not discriminate in the discharge of his godly deeds to people. In fact, he is more of a friend to the poor than the rich; more of an ally of the needy than the privileged. He discharges his duties without fear, favour or ill will towards anyone. He is the cool breeze that blows where it wills bringing succour and soothing pains to both ‘Jews’ and ‘Samaritans’ alike.

As House of Rep’s seeks engagement with state Assemblies over Constitution amendment, Abia State House of Assembly must be commended for completing the Process.

Governor Okezie Ikpeazu, ABSU and The Limit Of Mischief by Hon. Ginger Onwusibe.

2023: Voters should be Wary of ‘Poli-tricians’ -Unknown Author