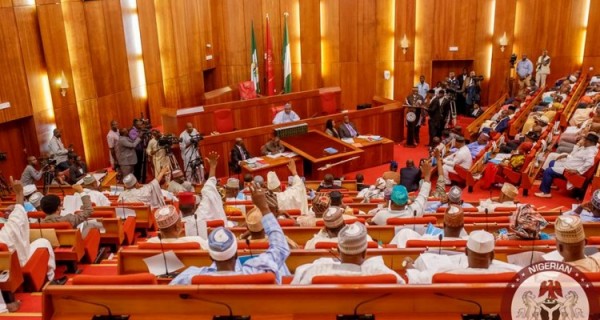 A coalition of four nongovernmental organizations (NGOs) says it is in possession of the authentic list of such lawmakers and payment details with bank records. The group speaking under a joint council, Niger Delta Elements Progressives Union (NIDEPU) and League for the Sustainable Development of the Niger Delta (LSDND), said they have given the NASS committees 14 days to drop the plan to probe the Interim Management Committee of the NDDC or protest marches around the nine states of the region would explode.

The statement issued by the president of the coalition/council, Bassey Ntak, secretary, Silas Braide, Lawrence Akpeti (coordinator, Warri-based Niger Delta Elements Progressive Union, NIDEPU); and Kingsley Arthur (coordinator, Effurun-based League for the Sustainable Development of the Niger Delta, LSDND) was made available to newsmen in the Niger Delta after their meeting in Port Harcourt on Saturday, June 6, 2020.

The NDDC had last week said it had the full list of NASS members who collected contracts with full payments and walked away, only to turn round to want to stop forensic audit or frustrate the processes through probes and intrigues.

Hints had emerged in 2019 that one lawmaker alone pocketed about 300 contracts with payments for about 200 of them without doing them. Another consultant was said to be collecting N1Bn every month for merely going to pick up statutory payments from oil majors on behalf of the Commission, while yet, some lawmakers were said to submit list of their contracts that must be paid for before the Commission’s budget would be passed.

These accusations seem to rock the relationship between the Commission and the NASS, but the managing director of the NDDC, the professor, Kemebradikumo Daniel Pondei, who came in on February 13, 2020, said last week that it was only the handiwork of about two leaders of the NASS committees making it look like the entire committees or NASS were involved.

This must be why the coalition in their statement urged the leadership of both houses (senate president and speaker of House) to call the two committee heads to order so as to stop interfering with the work of the IMC; when it is still not too late. The group observed that the tenure of the IMC would end in December 2020 when the forensic audit ought to be concluded, and that the game plan may be to keep the management busy with fights and probes until the audit time would elapse.

Charging further, the coalition said: “We are in full support of the ongoing forensic audit of the NDDC as instructed by President Muhammadu Buhari. Any attempt to scuttle the probe would be resisted by the Niger Delta people.

“We call on the National Assembly to discard the threat to probe the alleged N40Bn spent by the Commission. After our findings, it was obvious that the amount in question was a cooked up plot to rubbish the genuine effort of the interim management committee (IMC) of the Commission.

“Let it be known that we are in possession of authentic documents containing names of NASS members who benefited directly from the Commission through contracts they never executed, yet collected full sum of money upfront. We have their names, bank details and job description. We will not hesitate at this juncture, to publish such documents in the national dailies for the whole world to see who the real enemies of the Niger Delta people were.”

The coalition said it was taking this action because of what it called disturbing and overbearing tendencies of some members of the National Assembly who it said were beneficiaries of illicit contracts from the Commission without executing them even when monies were fully paid for such jobs. “They then turned around to put spanner in (the works of) running of the Commission. We as a people and key stakeholders have decided to take some stringent positions in this matter.”

The NASS committees had since responded, saying no amount of blackmail would stop them from probing the NDDC. Some groups such as Niger Delta Rights Action have also urged the NASS to go ahead with the probe and promised to reveal more corruption in the Commission.

The fight seems fierce and deep because some senior staff members in sensitive departments were asked to stay home (though with salaries) until the audit was over to avoid muddling up things. Some two workers were caught and handed to the police on a Saturday two weeks ago taking away a trough of documents.