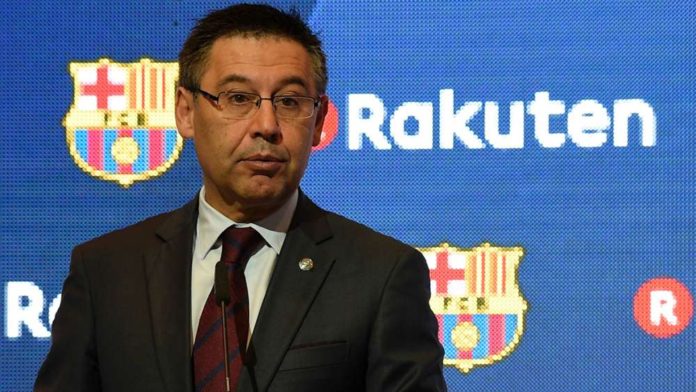 The Blaugrana chief was critical of the video technology system, claiming that the results it produces were influenced toward other teams.

Barcelona president Josep Maria Bartomeu has accused the VAR of favouring the same team as he hinted the system was stacked in favour of La Liga title rivals Real Madrid.

The Blaugrana official made the statement following Barca’s 4-1 victory over Villarreal, which saw the Catalans move four points behind Madrid with four games remaining.

Bartomeu referred to watching Madrid’s 1-0 victory over Athletic Club in San Mames on Sunday before revealing his dismay at the decisions made by the video technology.

Madrid’s game-winning goal came after the referee viewed the VAR pitch-side monitor to award a 76th-minute penalty dispatched by Sergio Ramos, while Athletic appeared unlucky to not receive a late spot-kick themselves.

“I watched San Mames match until almost the end of the second half,” Bartomeu said after Barca’s victory. “I feel bad because we have the best league in the world and VAR after coronavirus isn’t fair.

“It has changed some results and always favours the same team.”

Since the restart after the coronavirus-forced hiatus, Barcelona’s two point lead at the top of La Liga’s standings has evaporated with Madrid currently clear by four with the same number of matches left to play.

Barcelona’s draws against Sevilla, Celta Vigo and Atletico Madrid have allowed Madrid to take the initiative, with Los Blancos winning all of their seven games since the restart – and only conceding two goals along the way.

Barca’s victory against fifth-placed Villarreal was a positive performance, with Lionel Messi’s 18th and 19th assists breaking his personal record for most in a La Liga season.

A Pau Torres own goal in the third minute got Barca off to the best possible start, before the Yellow Submarine hit back through in-form attacker Gerard Moreno.

But then Messi took a hold of the match, setting up Luis Suarez in the 20th minute before helping to end Antoine Griezmann’s goal drought on the stroke of half-time.

COVID-19: Our Mode Of Celebrating Goals Has Changed – Samuel Chukwueze