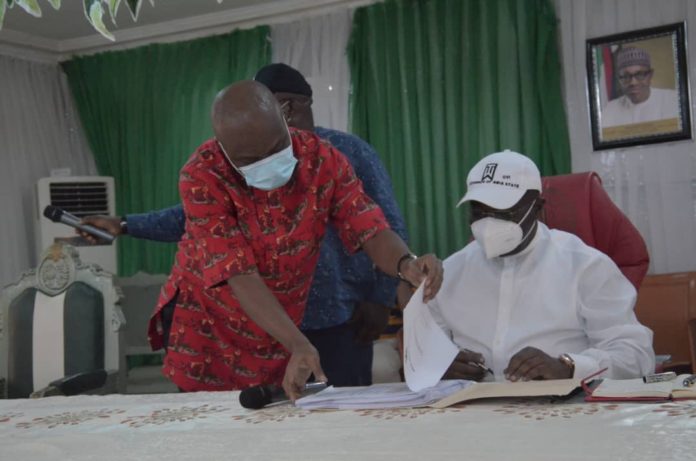 Speaking after signing the revised budget at the Banquet Hall of Government House, Umuahia, during the event which also coincided with the welcome visit to the Governor by members of the state house of assembly, Governor Okezie Ikpeazu thanked them for the expeditious passage of the revised budget .

He stated that Abia State is like other states across the federation facing economic stress as a result of the COVID-19 pandemic, adding that the present economic reality calls for all hands to be on deck in securing the socio-economic future of the state.

The Governor further highlighted some of the measures taken by his administration to mitigate the economic effect of the pandemic with emphasis on improvements in agriculture and industrial production.

Governor Ikpeazu who was full of appreciation to members of the 7th Abia State House of Assembly led by the Speaker, Rt Hon. Chinedum Orji, for being partners in progress with the Executive Arm, noted that such healthy relationship accounts for why Abia is still the most peaceful and politically stable State in Nigeria.

The State Chief Executive who narrated his recent experience with COVID-19 said that the pandemic is a pointer that sickness is a universal phenomenon, insisting that the virus is real and can be avoided if necessary safety measures are complied with .

Speaking earlier, the Speaker of Abia State House of Assembly, Engr. Chinedum Orji, thanked God for the divine healing of Governor Ikpeazu and prayed God to keep upholding him in the course of governance.

The Deputy Governor, Sir Ude Oko Chukwu, the SSG, Mr Chris Ezem, the Chief of Staff to the Governor, Dr ACB Agbazuere, the Executive Secretary Abia State Planning Commission, Dr Nnenna Chikezie among others were present at the event.