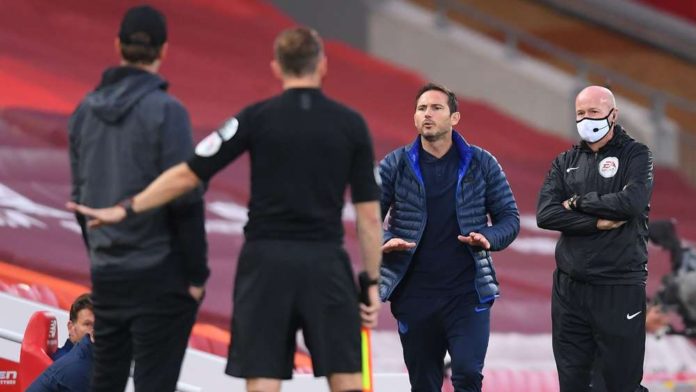 The Chelsea head coach fired a warning in the direction of the Premier League champions.

Frank Lampard warned Liverpool not to get “too arrogant” after Chelsea’s 5-3 Premier League loss at Anfield on Wednesday.

Liverpool lifted the Premier League trophy after the thrilling midweek victory, in which they led 3-0 and 4-1 before closing out their win.

Lampard was involved in an exchange with the Liverpool bench before Trent Alexander-Arnold curled in a free-kick and the Chelsea head coach criticised the hosts.

“For me it wasn’t a foul from [Mateo] Kovacic [on Sadio Mane] and there were little things that weren’t going,” Lampard told Sky Sports.

“On the bench, I’ve got no problem with Jurgen Klopp, he’s managed his team and it’s fantastic.

“Some of the bench, it’s a fine line between when you’re winning and they’ve won the league, fair play to Liverpool Football Club, but also don’t get too arrogant with it. In match play you get emotional and that was it.”

Alexander-Arnold curled in a brilliant free-kick after Naby Keita’s stunning opener, and Georginio Wijnaldum made it 3-0.

After Olivier Giroud gave Chelsea hope, Roberto Firmino restored Liverpool’s three-goal lead, only for Tammy Abraham and Christian Pulisic to drag the visitors back into the contest.

But Alex Oxlade-Chamberlain sealed Liverpool’s win, although Chelsea remain a point clear of fifth-placed Leicester City with one game remaining.

“It was extraordinary. Even when you say they threatened to run away with it, I felt we were in it because I could feel the way we were playing,” Lampard said.

“The first half, in terms of football, we were in it, it was a turnover and a great strike, a non-foul that goes in the top corner and then terrible from us in defending a corner.

“Other than that, we were okay, so the goal gave us hope, the lads showed great character, they’re a fantastic team and we can’t afford to make those mistakes.

“Some of the stuff I saw from our team today was resilient, was some quality and at 4-3 if we don’t concede a fifth, I felt like we were coming, but not to be.”

Chelsea are set to face Wolves in the final game of their Premier League season, knowing that a win or draw will see them seal a top-four spot.