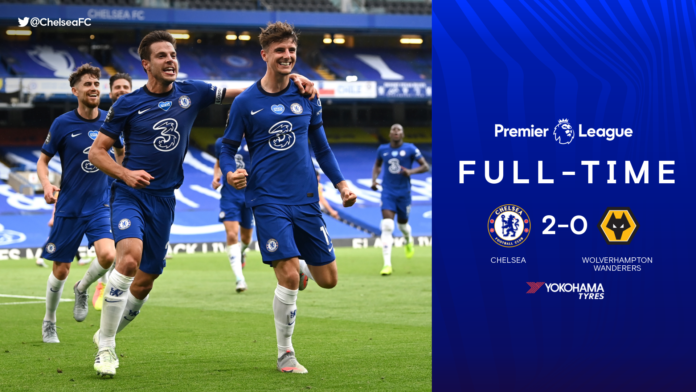 Manchester United and Chelsea has qualified for next season champions league.

Chelsea, Mason Mount scored a stunner and Olivier Giroud was on target as Chelsea sealed their place in the top four when beating Wolves 2-0.

Chelsea secured their place in the Champions League in convincing fashion as Mason Mount and Olivier Giroud sealed a 2-0 win over Wolves on the final day of the Premier League season.

With top-four rivals Manchester United and Leicester City facing each other on Sunday, Frank Lampard’s side needed no more than a point at Stamford Bridge to guarantee their spot in next season’s Champions League.

And despite a sluggish start, Chelsea turned on the style in first-half stoppage time, with Mount’s stunning free-kick opening the scoring before Giroud doubled their tally moments later.

Europa League hopefuls Wolves toiled in the second half, but the visitors offered little threat as their 41-year wait for a top-flight win at Stamford Bridge rolled on.

After 45 minutes largely devoid of action, Chelsea sparked into life in stoppage time – Mount curling a sensational free-kick into the left corner to break the deadlock.

Chelsea had their second three minutes later, Christian Pulisic and Mount combining to play in Giroud, who rounded Rui Patricio and shrugged off Conor Coady before hooking into an empty net.

Nuno Espirito Santo turned to substitute Adama Traore at the start of the second half, yet Chelsea remained in comfortable control.

Diogo Jota brought a save out of Willy Cabellero just prior to the hour, but Chelsea were hardly troubled as they held firm to finish in fourth place – with United’s victory over Leicester meaning Ole Gunnar Solskjaer’s side took third.

Manchester United broke new ground in the Premier League on Sunday as they booked their spot in next season’s Champions League with a 2-0 victory over Leicester.

The Red Devils went into the weekend’s game knowing that a point at the King Power Stadium against their fellow top-four challengers would be enough to secure a place in Europe’s premier competition.

And they made sure of their participation in familiar fashion, with Bruno Fernandes firing them ahead after 70 minutes from the penalty spot after Anthony Martial was brought down.

Martial had come close to winning a spot-kick earlier in the second half, with James Justin timing his intervention perfectly with the Frenchman steaming in on goal.

But there was little doubt in the second call, with ex-United man Jonny Evans picking up a yellow card for the challenge, and Fernandes made no mistake in steering the ball past Kasper Schmeichel to open the scoring.

The Portugal international has been deadly from 12 yards since joining United in January, and he has enjoyed no shortage of practice to hone his talents.

Lindelof: I have nothing bad to say about Mourinho