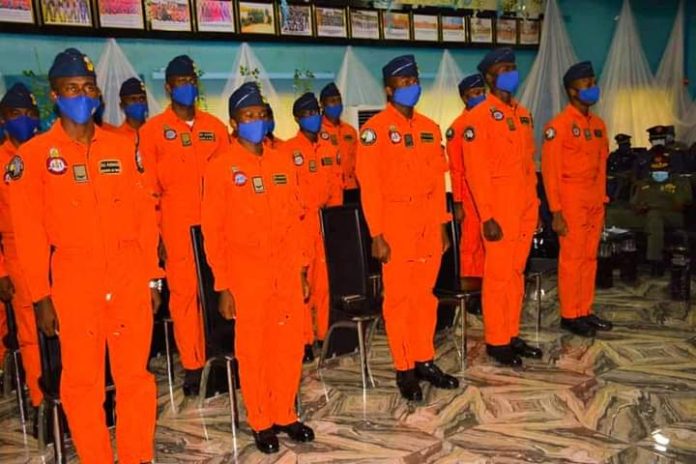 In its resolve to ensure availability of well trained pilots to prosecute the ongoing war against insurgency, banditry and other forms of criminality in the Country, the Nigerian Air Force (NAF) today, 10 September 2020, graduated additional 29 student pilots who have completed their ab-initio flying training at the 401 Flying Training School (401 FTS), Kaduna. The graduating students, who are members of 66 Regular Course of the Nigerian Defence Academy (NDA), comprising 27 male and 2 female officers, commenced training as flight cadets of NDA on 7 January 2019 as members of Student Pilots Course 46 (SP 46). With today’s graduation, the NAF has successfully graduated 145 student pilots from 401 FTS in the last 5 years.

While congratulating the graduands of SP 46 for withstanding the rigours, hard work and stress associated with the training, the Chief of the Air Staff (CAS), Air Marshal Sadique Abubakar, stated that his Administration’s drive to continually develop adequate capacity for effective, efficient and timely employment of Air Power in response to national security imperatives remains on course. The CAS noted that SP 46 had successfully conducted their flying training on both the Diamond 40 and Super Mushshak aircraft types, which according to him, was a positive deviation from what was obtainable in the past. The feat, he said, would not have been achieved if not for the dedication of the ground instructors, instructor pilots as well as prompt and effective aircraft maintenance and availability of aviation fuel which ensured qualitative training.

Air Marshal Abubakar enjoined the graduands to maintain the same attitude of dogged determination as they proceed to the next phase of military flying training while reminding them that there is more work to be done to earn their wings. He charged them to continue to exhibit the right aptitude and attitude as well as determination in order to improve their flying skills. “You must continually develop survival skills and be prepared to safely navigate platforms most especially at night and in all weather conditions” he added. The CAS further stated that at the inception of his Administration in 2015, 401 FTS had only 3 Diamond-40 platforms for the conduct of flying training. The grossly inadequate number and the unsuitability of the platform for aerobatics and other unusual manoeuvres, he said, significantly diminished the ability of the NAF to conduct military flying training. “Today, we have 15 platforms with a wide range of capabilities enabling quality training. This has empowered 401 FTS to train a total of 145 student pilots from the end of 2015 to date. Additionally, 24 Instructor Pilots and 15 UAV pilots have also been trained within the same period. These numbers represent the attainment of a remarkable feat that had previously eluded the NAF”, he said. The CAS therefore commended the Air Officer Commanding Air Training Command (AOC ATC), Air Vice Marshal (AVM) Musa Mukhtar, as well as the Commander 401 FTS, Air Commodore Ahmed Idris, and his entire staff for their efforts in realizing this feat.

The CAS also thanked the Commander-in-Chief of the Armed Forces, President Muhammadu Buhari, for his continued support and belief in the ability of the NAF. He noted that the timely provision of the much needed air assets as well as the resources to buy spares, aviation fuel and other consumables by the Federal Government was the most important factor that has translated into the commendable achievements recorded by the Service. Furthermore, he noted that the NAF’s ability to wing 114 pilots in the last 5 years has led to a vibrant application of Air Power in combating the security challenges facing the Country. According to him, the multiplier effect has been a boost especially in the counterterrorism and counterinsurgency efforts in the North East as well as the fight against armed banditry in the North West and North Central Zones of the Country.

Earlier in his welcome remarks, the Commander 401 FTS, while thanking the CAS for his unrelenting support to the Unit, stated that the Course was the first of its kind to have flown 2 different platforms; the Diamond 40 and Super Mushshak aircraft during the course of their training. He said the Unit achieved such feat even when it had to contend with other demanding tasks. The Commander noted that alongside the training of student pilots, the Unit is also actively involved in airlift/VIP flights as well as Intelligence Surveillance and Reconnaissance (ISR) missions in support of Operations THUNDER STRIKE and HADARIN DAJI against armed bandits in parts of North-West and North-Central Zones. According to him, the student pilots began their training with ground academic phase, which lasted for a period of 16 weeks, followed by the various stages of the flying phase with all 29 of them successfully completing the course with satisfactory levels of airmanship.

One of the highlights of the colorful event, which also had the NAF Chief of Training and Operations, AVM James Gwani, as well as the Commandants of the NDA and Armed Forces Command and Staff College in attendance, was the presentation of certificates to the graduating students. Awards were also presented to graduands who distinguished themselves on the Course, with Flying Officer Ja’afar Abdulkadir bagging both the Best in Academics as well as the Best All Round Student’s Awards, while Flying Officer Nicholas Egong clinched the Best in Flying Award.