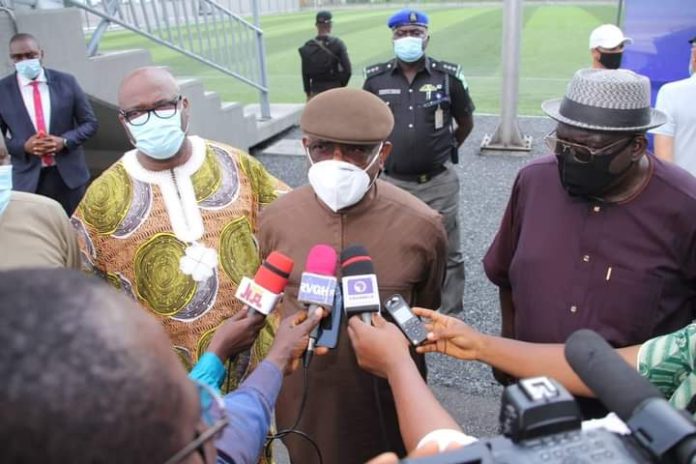 Rivers State Governor, Nyesom Ezenwo Wike says his administration always set funds aside for any project that it awards.

He stated that this is the reason why there would be no abandoned project in the State.

The Governor said he has continued to fulfil the promise of executing quality projects in every sector and the reconstruction of the Junior Doctors’ Quarters is one of such projects.

He stated that when completed, the Quarters would enhance the productivity of Doctors.

“The extent of work we saw at the Junior Doctors Quarters is very astonishing. We had promised to touch every sector to improve productivity of workers.

“Any project we want to embark upon, we make sure that there are funds for them. We want to complete every project awarded by us.

“What you’ve seen there is work still at the foundation level. It is very solid and you will only understand it when the structures are out of the ground. There are not less than 46 one-bedroom flats for the Junior Doctors,” he said.

At the Real Madrid Football Academy located at the Yakubu Gowon Stadium, the Governor expressed delight at the extent of work.

He said academic and sporting activities cannot begin at the Academy until the Federal Government directs the reopening of schools.

Governor Wike however, directed the Special Adviser on Real Madrid Football Academy to commence the screening of applicants in preparation for the opening.

“The Real Madrid Football Academy is conceived to give skills to our youths. Those of them who are talented in football will continue with it and others will face academics.

“This is first of its kind in Africa and we appreciate our partnership with Real Madrid ,Spain. Already, they have trained our coaches who are now eager to start work.

“Unfortunately, COVID-19 pandemic is preventing it. By the time the Federal Government directs for school to reopen, we hope to be ready.

“The Special Adviser should start the admission process. Those who are qualified will be admitted and made to hold on for resumption. Our decision is that 70 percent admission will be for Rivers people while 30 percent for others.

“Nobody will come here and not be happy with what we have done,” he emphasised.

“It is good to know it’s the first in Africa. The Governor is doing it not minding the cost because of his passion.

“It is for the development of Rivers youths and Nigerians. This is leadership in action. He has continued to build enduring structures for posterity, ” he said.

Former Majority Leader of the Rivers State House of Assembly, Chidi Lloyd said Governor Wike is strengthening institutions with his deliberate execution of projects among in all the sectors.

“It is obvious he is addressing the three domains of education with the Real Madrid Football Academy. This is for comprehensive development of Rivers youths.

“I admire him so much because he has a personal touch to all his projects. He supervises them to ensure that the agreed standard is delivered in order to have value for money.

“He has provided accommodation facilities to judges and doing so to doctors. I tell you, when workers are comfortable, they can resist taking of bribe,” he said.

The Special Adviser to the Governor on Real Madrid Football Academy, Christopher Green said about a thousand applications have been received from across the world and Spain.

He assured that with the directive given by the Governor, he would begin the screening of applications and prepare the successful applicants for resumption of activities.