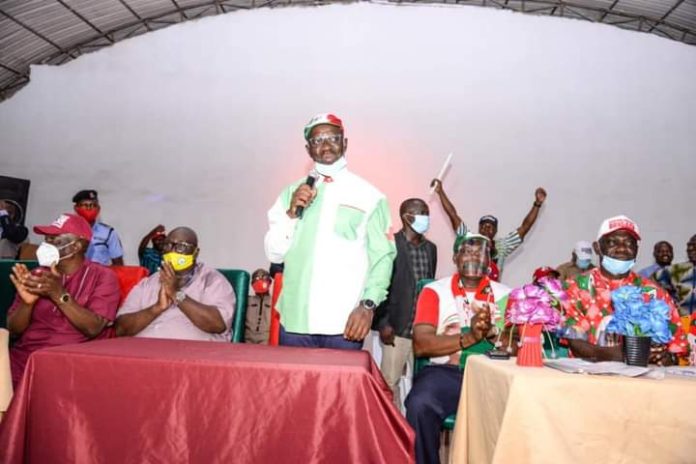 The Edo State Governor and candidate of the Peoples Democratic Party (PDP), Mr. Godwin Obaseki, has urged the electorate in the state not to sell their votes but turn out en masse on Saturday, September 19, 2020 to exercise their franchise for the right candidate who can take the state forward.

Obaseki who gave the charge at a meeting with party faithful in Ward 4, Benin City, expressed confidence that he will win the forthcoming election and retain his seat.

According to him, “I want to use this opportunity to thank you for coming out en masse when we rounded off our ward-to-ward campaign. You people made me proud; that rally is still being discussed.

“This election is about Ward 4 as the opposition have been lying that I have never won my ward. They are planning to buy votes here and in other wards; they want to induce you people with the sum of N10, 000 per voter.

“You know what to do; collect the money and still vote for the PDP. Collect their money and at the end we will rejoice over them.”

Obaseki continued: “They also said they are going to disgrace me at this ward. I came to tell you to prepare to go from one ward to the other, enlightening other eligible voters about the need to turn out to vote massively for the PDP.”

“All of you should snap with your phones and post on the internet when the results are being announced. In Ward 4, we have a total of 13,000 registered voters and we must bring out 7,000 voters on that day for the PDP from this ward alone.

“I want Ward 4 to deliver the highest votes in the whole of Oredo Local Government Area of the state,” Obaseki added.

On his part, Mr. Adams Otige, the ward leader, assured the governor of the support of the people, assuring to mobilise thousands of other voters in the ward to ensure the governor’s victory at the poll.