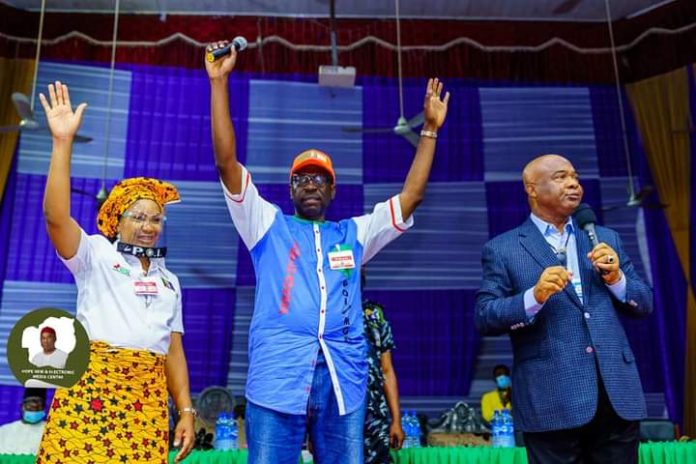 … As Ohaneze youths honour him.

The ancient city of Benin stood still yesterday as the Imo State Governor, Senator Hope Uzodimma met with Igbo leaders in Edo State, urging them to punish Governor Godwin Obaseki of the People’s Democratic Party (PDP) with their PVCs, in the Saturday September 19, 2020 governorship election in the state.

Governor Uzodimma who was honoured on the occasion by the Igbo Youth Union (IYU) and the Youth Wing of the apex Igbo socio-cultural organisation, Ohaneze N’Igbo in Edo State, said Governor Obaseki’s tax policies is anti Igbos, therefore Ndigbo in Edo State should vote for Pastor Osagie Ize-Iyamu and the All Progressives Congress (APC).

The UNIBEN auditorium where the event held was filled to capacity and overflowing, as the crowd who were excited with the presence of Governor Uzodimma, kept singing: “Owa Oyoko! Owa Oyoko! Owa Imo!”

According to the governor: “Obaseki and his PDP have been blackmailing the APC, alleging that we want to rig election. Meanwhile, that is exactly what he is planning. But, let me tell our Igbo people, go out there and vote for APC. We will protect the votes. We will stop Obaseki from rigging.

“We have many of our brothers and sisters who own businesses in Edo State, but those businesses are suffering today due to the inhuman policies of the PDP administration in Edo.

“As Igbos, we must be vigilant, so that people will not decieve you. PDP is coming today begging for your votes just because they need it now, but that is a deciet. This governor does not like the Igbos. They are only coming because of the votes and after that Obaseki will abandon you.

“Ize-Iyamu is a tested politician that can keep agreement, so we trust him that he will deliver and continue from where Oshiomhole stopped. Oshiomhole employed Igbos during his administration and Pastor will continue with that. He will create an enabling environment for our people to do their businesses.”

“We heard that they are afraid because they have lost the election, so all they are planning is to rig. You cannot rig where the people have rejected you. Don’t be scared, don’t be intimidated, go out and vote PDP out and we will protect the votes” he declared.

Chairman of the Igbo Youth Union, Obinna Anwatu, said that the presence of Governor Uzodimma in Edo State has heightened their determination to deliver APC in the forthcoming election, adding that the award given to the governor was in recognition of his developmental strides across the 27 LGAs in Imo State.

Immediate past National Chairman of the APC, Comrade Adams Oshiomhole described Governor Uzodimma as a genuine party man, adding that his eight months reign so far as governor of Imo State has occasioned geniune progress in the state.