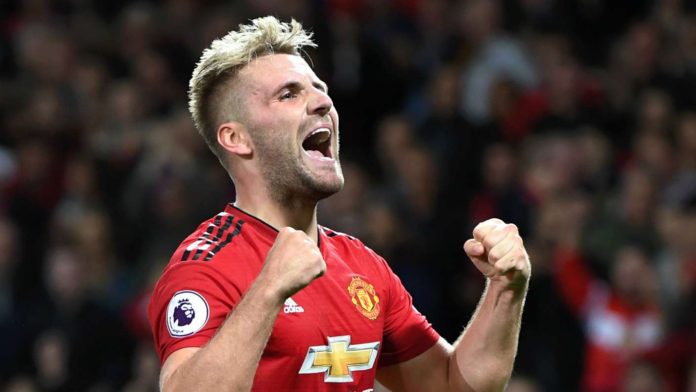 The Red Devils’ campaign begins next week and the full-back hopes it ends with a few additions to the trophy cabinet.

Manchester United must prioritise winning silverware this season instead of settling for a place in the Premier League’s top four, says full-back Luke Shaw.

Ole Gunnar Solskjaer’s men finished third in the English top-flight last season and made it as far as the semi-finals in the Europa League, FA Cup and Carabao Cup.

The Red Devils have failed to win the Premier League since 2013 and have not lifted any silverware since their Europa League and League Cup successes three years ago.

United’s 2020-21 campaign will begin next Sunday when they face Crystal Palace in the league and Shaw says they are ready to challenge despite their unusually short pre-season campaign.

“It’s a very weird feeling, especially for me. I don’t feel I’ve had much time off. I haven’t, to be honest!” the England full-back told the club’s website.

“But this is life sometimes. You need to be ready, whatever happens, and it’s one of those scenarios where we have a lot of world-class players we’re looking forward to getting back [in training] on Monday.

United lost 1-0 in a friendly against Aston Villa on Saturday, with Shaw playing all 90 minutes.

The 25-year-old was disappointed to lose, but was happy to get some match practice under his belt ahead of the clash against Palace.

“Obviously it’s a friendly but I’m disappointed we didn’t win,“ he said. ”And we lost. I’m really disappointed, to be honest.

“We create opportunities but struggle at times to find the back of the net. As someone with the [playing] experience he has, in that sort of position, the manager is really on to the players about that in training, trying to improve that.

“But the main focus today was obviously getting minutes in the tank. It has been a very disjointed pre-season really. At the start of pre-season, there were only four of us training, with what’s going on at the moment, the quarantines and the internationals, so it was very difficult for us.”

‘You can’t stop Messi’ – Zenden fears for Liverpool ahead of...